Ian Somerhalder and Nina Dobrev gave a super-funny speech at the People’s Choice Awards as they accepted their mutual award for Favorite On-Screen Chemistry on The Vampire Diaries. 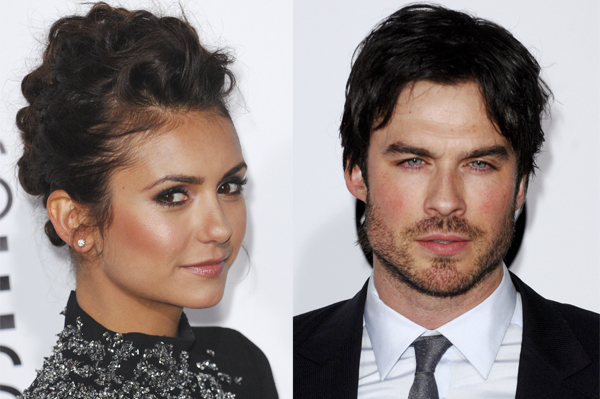 The Vampire Diaries co-stars and former lovebirds, Ian Somerhalder and Nina Dobrev, gave a very humorous speech after they won a mutual award on the People’s Choice Awards.

The fan-favorite pair, who have remained good pals after their breakup, were charmingly graceful as they accepted their award for having the best chemistry on TV. Somerhalder and Dobrev charmed the audience as they sweetly poked fun at themselves and their on-screen/offscreen relationship.

As they took the stage, the handsome duo looked adorable as they addressed their long history together. “Wow, this is crazy!” Ian said. “Can you believe this is almost five years in the making?”

Dobrev smiled as she agreed. “You’re right, yeah! But you know what’s crazier though, Ian, is that at the beginning of the show, Elena actually hated Damon.”

“You were hooking up with my brother!” Somerhalder hit back, referring to Dobrev’s character, Elena, and her longtime romance with his character Damon’s brother, Stefan (Paul Wesley).

“But eventually, she fell in love with me,” Ian said with a casual wave.

“And then we broke up in real life!” Nina added, with Somerhalder retorting, “And yet, our characters are still dating on the show…”

Somerhalder planted a big sweet kiss on Dobrev’s cheek as he addressed the audience and said, “Thank you guys so much!”

Watch the adorable exchange between Somerhalder and Dobrev below: