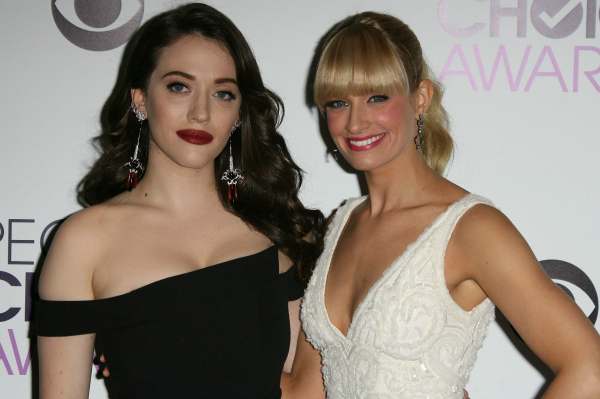 This Pennsylvania native has made a name for herself playing witty, rebellious characters with razor-sharp sarcasm. Fun fact? Dennings actually got her start on Sex and the City — remember the super-rich, F-bomb-dropping 13-year-old Jenny Brier? She transitioned to the big screen by putting her acerbic sense of humor to good use in movies like The 40-Year-Old Virgin, Nick and Norah’s Infinite Playlist and — most recently — Thor: The Dark World. On 2 Broke Girls, she stars as struggling waitress Max Black alongside Behrs.

Like Dennings, fresh-faced blonde Beth Behrs hails from Pennsylvania — but her passion for acting really blossomed once her family moved to California when she was 15 years old. There, in Marin County, Behrs studied drama in high school, at the American Conservatory Theater in San Francisco and, ultimately, at the UCLA School of Theater, Film and Television in Los Angeles, California. Bit parts on shows like NCIS: Los Angeles and Castle led to her breakout role as Caroline Channing in 2 Broke Girls, in which she plays Dennings’ foil.

Dennings kept on cue throughout the show, but her body language at times seemed to indicate she was battling butterflies in her stomach.
Behrs appeared confident and comfortable, even when she was performing embarrassing skits (See below for more on that!).

As Dennings aptly points out early in the show, “She’s the Hathaway, I’m the Franco.” As such, Dennings didn’t perform skits as she set up Behr to segue into them. She was hilarious in the show’s opening skit, particularly when — after The Vampire Diaries hottie Ian Somerhalder said he wanted to make her undead — she deadpanned, “Too late dude. I’m already a waitress.”
Here’s where Behrs really shined. From the get-go, she set the tone with a cute skit in which she served Brad Paisley a cheeseburger and fawned over the “sexy cowboy.” She also got to show off her classical training as a singer by belting out bits of “The Sound of Music,” “Wrecking Ball” and “Before He Cheats.” But hands down, our favorite was her rendition of “Baby Got Back.”

While Behrs was the queen of skits, Dennings definitely boasted the lion’s share of the jokes. And as sarcasm mixed with a dash of inappropriateness always does, her zingers about things like her “Golden Globes” and how nothing lasts forever except for “Maggie Smith and the tramp stamp” cracked us up.
Behrs may not have written a ton of jokes, per se, but the actress’ bubbly personality and infectious enthusiasm helped Dennings’ jokes hit their mark. Not to mention, she was typically the butt of Dennings’ jokes, which she was a great sport about. The show wouldn’t have been the same without her silly little idiosyncrasies.

To kick off the night, Dennings arrived in a black, floral strapless evening gown by David Meister. For the opening skit, the dark-haired stunner opted for a pretty blue peplum knee-length number. To close the show, Dennings rocked a black evening gown with an asymmetrical neckline and belted waist. But personally, we adored Dennings in the elegant black suit she wore for the “Baby Got Back” skit.
Behrs walked the red carpet in a floor-skimming, sleek black-and-white color-blocked strapless gown by Rene Caovilla. During the show’s opening skit, Behrs showed off her mile-long legs with a short, shimmery cocktail dress. We coveted Behrs’ super-sequiny, Gatsbyesque gold flapper dress from the “Baby Got Back” skit, but our favorite on her was the short, white lace number she wore during the show’s close.

Who do you think made the better People’s Choice Awards host? We know… it’s a tough call!