Dennis Rodman says he was drunk when he freaked out during a CNN interview about his trips to North Korea. 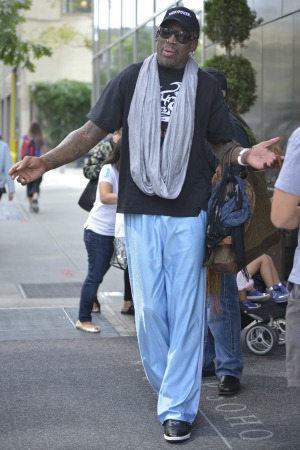 Dennis Rodman has been reamed by the family of political prisoner Kenneth Bae for insinuating that his incarceration at the hands of brutal North Korean dictator Kim Jong On is his own fault — and now the basketball star says he was drunk when he threw the temper tantrum on CNN on Tuesday.

Bae’s sister Terri Chung expressed her disgust at Rodman’s comments, telling the news network, “He was in a position to do some good and to help advocate for Kenneth. He refused to do so. But then instead he has chosen to hurl these outrageous accusations against Kenneth. He clearly doesn’t know anything about Kenneth, about his case. And so we were appalled by that.”

A chastised Rodman issued an apology to Bae’s family for his comments and for his rant in general.

“I embarrassed a lot of people,” Rodman continued. “I’m very sorry. At this point, I should know better than to make political statements. I’m truly sorry.”

“Some of my teammates were leaving because of pressure from their families and business associates,” he said, adding that his dream of “basketball diplomacy was quickly falling apart.”

“I had been drinking,” he said. “It’s not an excuse, but by the time the interview happened I was upset. I was overwhelmed.”

Rodman has been widely criticized for his chummy relationship with Kim, who, in addition to a multitude of human rights abuses against his citizens, is also rumored to have executed his own uncle for an unknown political betrayal.

This was Rodman’s fourth trip to the secretive country. Neither the NBA nor the U.S. government say they have anything to do with the visits.