Justin Timberlake won big last night at the People’s Choice Awards, but what really stole the show was his acceptance speech with Ellen DeGeneres. 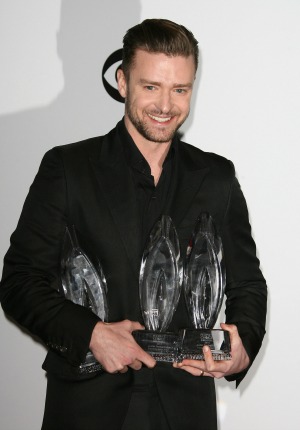 Justin Timberlake has managed to add another three prestigious accolades to his ever increasing list.

Last night, the “Take Back the Night” singer attended the 2014 People’s Choice Awards in Los Angeles, California, and was awarded the honors of Favorite Male Artist, Favorite R&B Artist and Favorite Album for The 20/20 Experience.

However, it was Timberlake’s acceptance speech for Favorite Male Artist that gathered the most attention.

The “Mirrors” hit maker, who was seated next to fellow People’s Choice Awards winner Ellen DeGeneres at the awards show, decided they’d put on a show and play up to the cameras.

The funny woman almost pulled a Kanye West when she was about to get up onstage with Timberlake as he accepted his award.

Timberlake was clearly impressed with his pal’s joke and started off his acceptance speech with some lighthearted humor. He said, “Thank you! I would like to thank Ellen for all the personal inspiration and the cookies — bakes a hell of a cookie.”

“No, I’d like to thank my parents for continuing to instill in me that no dream is too big.”

“I’d like to thank all the fans who voted. I’ll take it — people’s champ, I love it,” he continued.

Although Timberlake’s lovely wife Jessica Biel was nowhere to be seen for the second People’s Choice Awards show in a row, she, too, did not go without a mention.

“The LoveStoned/I Think She Knows” singer said, “And I’d like to thank my beautiful wife for teaching me patience and the little things like just putting the dishes in the dishwasher. It goes a long way — fellas, you’re welcome!”