Beth Behrs and Kat Dennings hosted the People’s Choice Awards, and were the perfect choice for the first awards show of the season. 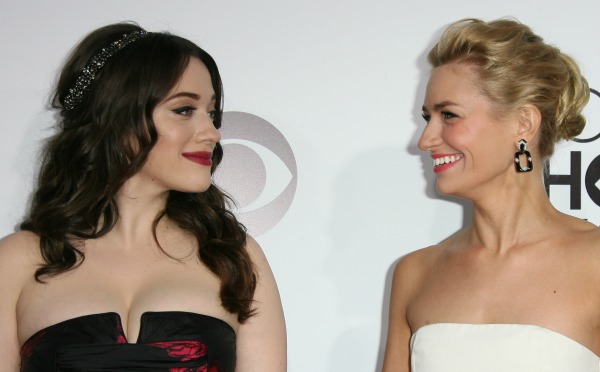 Kat Dennings and Beth Behrs hosted the People’s Choice Awards on Wednesday night, Jan. 8, to (pretty much) rave reviews. The 2 Broke Girls actresses carried the show with their humor, and the great relationship they have developed in the last few years.

Behrs and Dennings only went through a few costume changes, and appeared on stage more than most award show hosts seem to. The commentary for the show was written by the writers for 2 Broke Girls, a choice that had both actresses feeling in their comfort zones. Behrs recently told TV Guide, “we’re super excited about that. What they have planned is amazing.”

There were plenty of other presenters and performers, but it seems like Dennings and Behrs could have easily pulled off the show all by themselves.

“It’ll be interesting and fun for people to see us as ourselves — but a heightened stage version of ourselves,” Dennings added.

Behrs foreshadowed the show, saying she would be interested in doing some singing on the show.

“I’d be game because I love me some song, but Kat, on the other hand, might not be as game,” Behrs said.

And sing she did. The actress broke into song mid-skit. Dennings pretended to be reading tweets about whether people wanted Behrs to sing or not. Behrs sang songs like “The Sound of Music,” Miley Cyrus‘ “Wrecking Ball,” Carrie Underwood‘s “Before He Cheats” and even “Baby Got Back,” managing some sort of twerking action with that song.

People’s Choice Awards: What do Cyrus, Rihanna & Gaga have in common? >>

The skit could easily have been tacky, or even embarrassing, but Behrs’ voice and stage presence carried it though. The actresses pulled it off and Behrs showed the world she is more than just an actress.

Dennings ended the show by saying, “It was a real dream come true — for Beth.”

While the hosting choice may have seemed like a surprise, Dennings and Behrs pulled it off in the way only the two of them could.