Brad Paisley showed up wifeless to the People’s Choice Awards, and at least two women (but probably more) may have been gotten a little too close to the country singer. 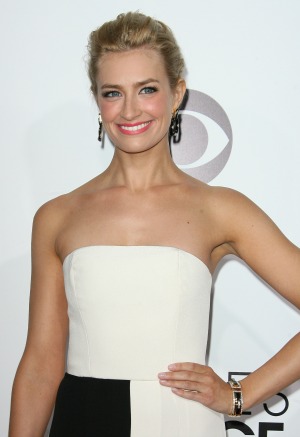 Brad Paisley may be married, but he has millions of adoring fans around the world. He may have gained at least a few more on Wednesday night for the People’s Choice Awards. And this one was allowed to get much closer than most of his fans.

CBS took over the award show, with 2 Broke Girls actresses Kat Dennings and Beth Behrs hosting. The two actresses started the People’s Choice Awards in the diner of their show, and some very famous friends joined them. Kaley Cuoco, Arsenio Hall, Ian Ziering and others joined them for the skit.

They then appeared on the award show stage, and Behrs made a joke about how people know Dennings from all her movies, but really think she is actually a waitress. Country singer Brad Paisley stood up and said he wanted a hamburger.

Behrs told him she would be a waitress for the “cute cowboy.” Hundreds of waitresses appeared on stage to feed the crowd, but the actress said she would personally deliver Paisley’s to him.

Heidi Klum later jumped in and added her own flirting . While Paisley was performing his song “Mona Lisa,” he ran through the crowd. Klum grabbed his hat, but the singer did not look pleased. He said something to her, and ran back up on the stage without his hat.

Paisley’s wife Kimberly was absent from the People’s Choice Awards, but the country singer was more than happy to oblige Behrs, and even gave her a hug (in return for his hamburger). It didn’t seem like he was very happy with Klum, but there were plenty of other women at the show who may feel the same. It looks like he may have a few new not-so-secret admirers.

Behrs and Dennings used the chemistry they have gained on their show to host the People’s Choice Awards (according to Behrs, “the only award shows where nominees include Sharknado and Oprah), but it felt like they needed each other to keep the show going.

But the adoration for Paisley is something pretty much everyone can relate to.