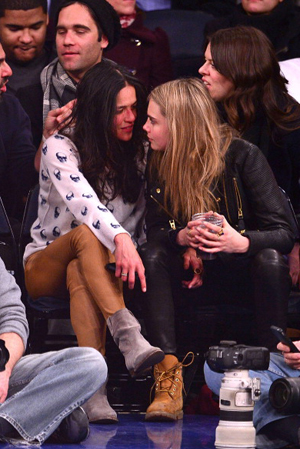 Adding more action to the already-happening Knicks game Tuesday, Jan. 7, Michelle Rodriguez and Cara Delevingne made a big scene while getting drunk and making out.

In a bizarre show of extreme affection, Rodriguez and Delevingne were seen increasingly getting drunker as they giggled, cuddled and whispered into each other’s ears. “Cara had to take Michelle’s drink away from her during the 2nd half of the game. Michelle was so sloppy, it was embarrassing to watch,” an observer told Us Weekly.

According to TMZ, Rodriguez was all over Delevingne and looked “totally out of it” as she continued to make a huge scene in front of the other spectators. Several photos have surfaced where the slipshod pair can be seen making funny faces at each other, licking the air, kissing and laughing as if no one else was around.

Later, upon leaving the game, the duo was caught on video as Rodriguez performed some crazy air kicks as she and Delevingne walked down the sidewalk. In the video, posted by TMZ, the guy behind the camera kept asking how the game was, but the two girls ignored him as they continued walking and doing acrobatics in the street.

Selena Gomez vs. Cara Delevingne: Who will Justin Bieber choose >>

Finally, after being asked whether she liked the Knicks or the Nets better, Delevingne answered, “Dude, I just came to New York, so I don’t know.” Meanwhile, Rodriguez just began yelling at the paparazzo as she ran up to him when the video cut off.

Just a couple of weeks ago, Delevingne was caught swapping spit with Miley Cyrus as the two visited a coffee shop in Amsterdam. There’s no official word on whether Delevingne prefers to date women, but Rodriguez has proudly stated that she happily goes both ways.

“I do as I please. I am too f***ing curious to sit there and not try when I can,” Rodriguez told Entertainment Weekly. “Men are intriguing. So are chicks.”