Parks and Recreation will reach its 100th episode milestone on Thursday on Leslie’s last day in office. Find out what might be in store, and enjoy a retrospective the cast filmed about their favorite moments from the first 99 episodes. 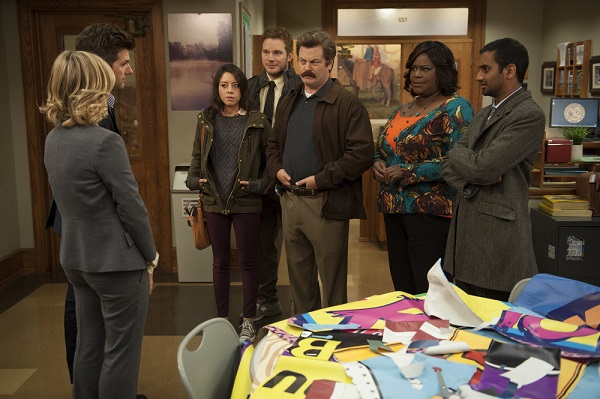 Leslie Knope’s (Amy Poehler) time in office as a Pawnee city councilor is coming to an end. It’s a stroke of genius that it’s occurring as Parks and Recreation celebrates its 100th episode.

There will be plenty of guest stars around to help the cast celebrate the milestone. Kristen Bell will be guest-starring as the new councilor Ingrid de Forest, Henry Winkler will be on hand as Dr. Saperstein to give the joyous news of the sex of their baby to Chris (Rob Lowe) and Ann (Rashida Jones), and TV Guide announced today that Kathryn Hahn will be making an appearance as Jennifer Barkley.

If you recall, Jennifer is the character who came to Parks and Recreation first to represent Leslie’s opponent, Bobby Newport (Paul Rudd) in Season 4, and she later offered Ben (Adam Scott) his big opportunity to run a congressional campaign in Washington, D.C. Is she swinging by town to offer Leslie her next big opportunity?

Surely that’s only the tip of the iceberg as far as guests we can expect to be milling around Pawnee as Leslie goes about her last hours in office. To make things more fun, she’ll get to say goodbye with Andy (Chris Pratt) around, because it appears he’s returning from London in time for her last day.

Reaching 100 episodes is quite a feat, and all of the players involved took time to sit down and share their favorite moments of the first 99 in the video below. By the end, it was a pretty emotional journey. The video lasts about 20 minutes, but it’s worth the watch. Even behind the camera they were still in character, as Jim O’Heir talked about the respect he receives when he’s not getting pounded on as Jerry. Keep an eye out for that as it’s a highlight. Also notable is the respect for Pratt, and how aptly his name fits his comedic style. Enjoy!