Kim Kardashian showed a large amount of hair loss after her pregnancy, sparking rumors she may be going bald due to losing weight so fast. 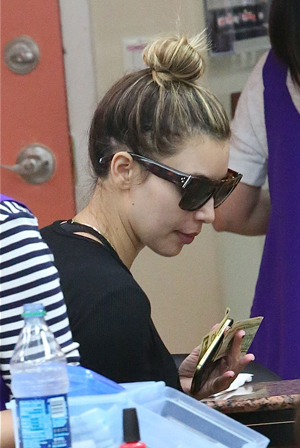 Reality maven Kim Kardashian lost her pregnancy weight very fast, but she seems to be left with a heavier hair loss than normal after her rapid slimdown.

Kardashian was spotted with several bald patches around her hairline as she sported a high bun recently. Apparently, the 33-year-old mom has been wearing weaves and extensions to hide her alarming hair loss, The Daily Mail reported.

Experts told the British tabloid that it could be Kardashian’s fast weight loss that triggered her locks to shed more than normal.

“It is well known that during the later stage of pregnancy you lose less hair due to hormones, making it thicker and lusher,” hair extension specialist Tatiana Karelina told the paper. “But when you have the baby most women find they seem to be losing a lot more hair than normal.”

However, Karelina added that the amount of weight Kardashian lost so quickly, paired with her dramatic diet, “may have accelerated the hair loss, giving sparser-looking patches; we can clearly see how thin her hair is around the hairline.”

While her rapid weight loss and the birth of her baby are probably the biggest contributors to the reality star’s thinning hair, her reliance on hair extensions is not helping matters much.

“In spite of giving instant full, thick hair, weaves put extreme pressure on the hair and scalp, often too heavy and tight,” Karelina added. “The pulling and weight often cause severe migraines and Traction Alopecia, and actually aid hair loss rather than help to recover healthy hair growth.”

The hair expert suggested Kardashian get a less damaging type of extension, or even a clip-on that can be taken out often enough to relieve the pressure on her hair and head.