That didn’t take long! The week that Emma Watson’s breakup was announced, a new boyfriend enters the picture. 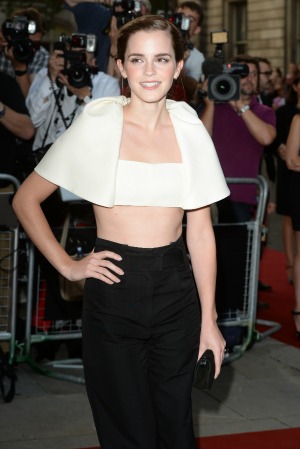 Fans were just digesting the news that Emma Watson was no longer dating Will Adamowicz, but it looks like her single days didn’t last very long. According to the U.K.’s Mirror, the 23-year-old actress might have a new beau on her arm.

The rumored paramour is 21-year-old Oxford University student Matthew Janney. He plays for the college rugby team and he was reportedly named the campus’s most eligible bachelor before dating the British star.

A source told the publication, “It’s early days but they’re very much into each other. Matt’s a real hit with the girls but he may have finally met his match. She doesn’t suffer fools gladly. But Matt’s a lovely guy, charismatic and intelligent. They make a great couple.”

Watson split with her last boyfriend in the summer, but the news of their breakup just hit the media this week. So while it may seem like a quick turnaround, the Harry Potter star has been single all fall.

This is the second Oxford University student the actress has dated. Adamowicz and Watson met while she was a student there.

There has been no confirmation from the star herself about her private life and her rep wasn’t giving away any information to the MailOnline.

“We do not comment on speculation regarding our clients’ private lives, I’m afraid,” said Watson’s spokesperson.

We’ll just have to wait and see if this hot couple turns out to be true. In the meantime, Watson is gearing up for the release of her next film Noah, starring Russell Crowe and Jennifer Connelly. It hits the big screen on March 28.