Alexander Skarsgård nude in the South Pole is quite the sight to see. Behold the latest photo of the True Blood actor to pop up on Instagram! 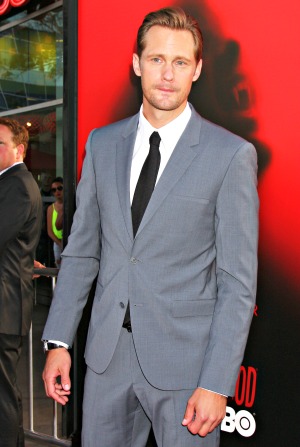 Alexander Skarsgård‘s Instagram account is heating up despite the True Blood star’s trek to the icy South Pole.

Proving he’s comfortable going nude anytime, anywhere, the man we’ve come to know and love as HBO’s vampire Eric Northman posed with his trousers around his ankles while sitting on a presumably frozen porcelain throne.

Inge Solheim, who has been Skarsgård’s team’s guide on the Walking With the Wounded challenge, did the honor of capturing the nude photo of the actor and posting it to Instagram.

Explaining to curious fans why the hunky 37-year-old Swedish star is copping a squat on a toilet in the sub-zero temperatures of Antarctica, he wrote, “#southpole -30C What are you reading Alex? The script for season 7 of #truebloodHBO.”

The Skarsgård nude photo from Instagram is, of course, not the first time True Blood fans have been treated to a body-baring glimpse.

Referring to the hit show’s 70th episode, which included a wholly-exposing shot of naked Northman, co-star Stephen Moyer told E! News, “It was never written to have him full frontal. Alex doesn’t like wearing his ‘sock’ or the ‘sack of destiny’ as we call it. It’s the sack of destiny that covers everything. He doesn’t like wearing those, so he had one in his room that day, [but] he was the one who chose not to wear it.”

Though it looks like privacy is hard to come by in the South Pole, Skarsgård likely doesn’t mind. Speaking to Conan O’Brien about his childhood, he previously explained, “My dad and his side of the family are old hippies. I was 14 the first time I saw my dad wearing pants. He was always naked.”

Here’s hoping that the True Blood Season 7 script takes advantage of its star’s willingness to strip! The fangs and fun are set to return this summer.