Farrah Abraham is finally realizing what most intelligent people inherently know: A sex tape is never a good idea.

Related story Why Was Teen Mom's Farrah Abraham Mom-Shamed For a Bikini Video With Her Daughter? 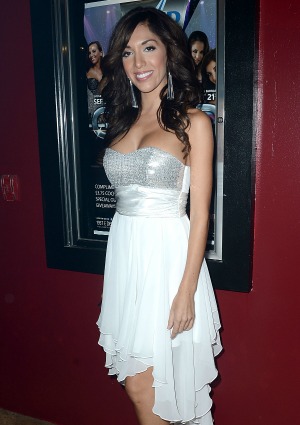 Lesson learned: Farrah Abraham has come to the realization that making a sex tape may not have been the best idea she ever had.

“It made it hard to have friends and a private life and to trust family, who I feel use me for money,” Abraham told InTouch Weekly. “If I went back in time, I would not have done it. The sex tape ruined my life!”

Abraham, who sold the tape to Vivid Entertainment, added that she didn’t realize how much attention the performance would bring. “Knowing my sex tape was out there for everyone in the world to see… was overwhelming.”

“I wanted to hide my face and not go out or pick up my phone,” she said, glossing over the fact that she did publicity for the piece and even signed a deal afterwards for her own sex toy line.

Abraham is now appearing on VH1’s Couples Therapy solo, and credits the show with her new attitude adjustment.

“Therapy helped me understand I can’t continue experiencing life [the way I have been], that I’m more special than sex tapes,” she said. “Hearing others tell me my worth is my body… I’m stronger than that. If anything, now I can steer my daughter to a better future and away from the choices I’ve made.”

Tell us: Is Farrah Abraham’s change of heart sincere?