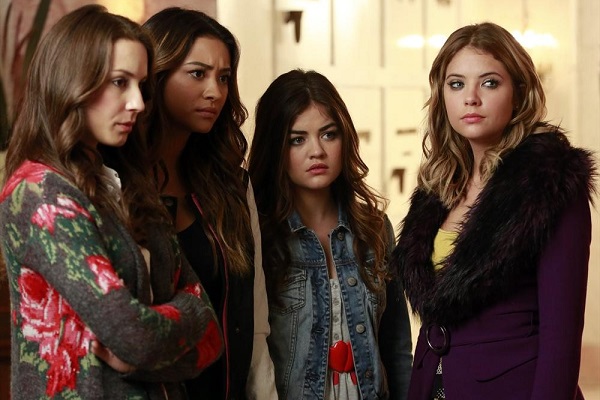 “Who’s in the Box,” was a really interesting return from hiatus for Pretty Little Liars. It wasn’t full of shocks and we weren’t even treated to a glimpse of the recently-returned-from-the-grave Alison — but the implications for the Liars going forward could be huge.

Pretty Little Liars Season 4 is the season of answers >>

Hanna discovered a girl had gone missing the same time as Ali, so she reached out to her friends to see if they might have mistakenly buried Sarah (their version of Ali) in Ali’s tomb. Meeting Claire and Tina was very enlightening for Emily and Hanna.

Now that the girls know Ali is alive, it’s possible they’ll be able to let her go. Claire was jealous that Ali was dead, because they’re done and they have their lives back. She described their lives with Sarah as “for everything she gave you, she took two things away.” It’s like they were leading parallel lives. If there hadn’t been a photo of Sarah on the website, I’d wonder if Ali wasn’t leading a double life.

With the reappearance of Ali, it could all start again, but this time the Liars not only have Ali to make them second-guess their decisions, but A to throw a wrench into everything they do.

12 Clues tying Ezra to A we should have seen >>

When Emily told Paige about Ali breaking her heart, it was apparent that she was thinking the same thing. But instead of letting it break her again, it was as if having Ali back was allowing her to finally let her go. They don’t have to hold Ali up to some unrealistic standard anymore because she’s dead and they’re alive. They can let themselves off the hook. Will they?

Mona’s conversation with Ezra about Jekyll and Hyde was fitting and she finally found someone to make her shiver. When Ezra told Mona that losing her fear is her vulnerability because having fear allows people to keep from pushing others too far when you don’t know how far they might push back, I didn’t know which rotten character to side with!

Did you notice how carefully Ezra chose his words when he talked to Aria about starting over? “After you graduate and we both leave this place, I would like to try to be the person you think I am.” He knows that the person she sees is far better than the one he sees in the mirror. Now that we know Sarah has never been found and his cabin has a cavernous hole underneath it, I expect her to pop out of it.

The most heartbreaking goodbye was between Hanna and Caleb because it didn’t seem like either of them chose to break up. Caleb just left and cried. Hanna thinks he’s going back to Miranda and that she sent him into her arms, but he assured her that’s not the case.

The two never discussed the truth behind his goodbye that seems so very final, and that’s why I fully expect to see her pop up in Ravenswood — that and the pesky tweet from Ashley Benson about shooting scenes on Ravenswood. I wonder if she’d be able to see Miranda when she got there. Tyler Blackburn deserves high praise for his emotional breakdown. It sure seemed like he was saying a permanent goodbye, didn’t it?

Hanna revealed she had Ali’s diary, which she got from Ali’s lair in Ravenswood. She said she hid it from the others because of the horrible things inside, but we watched her pry it open with a knife shortly before she showed them so why was she really hiding it? Ali showed her where to find it — why would she want them to read really awful things that she wrote?

With Ali, you never know.

Do you think with Ali’s return, the Liars will finally be able to say goodbye to Ali by releasing her hold over them? How long will the goodbye between Hanna and Caleb last? Hit the comments and chat about the mid-season premiere!