Skye and the rest of the team split up to track down Coulson, who finds out more than he wants to know about what happened after he died in “The Magical Place.” 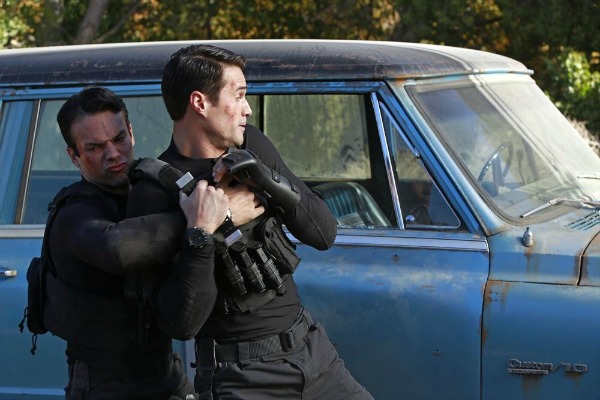 Well it looks like all of my guesses about what S.H.I.E.L.D. was hiding from Coulson were pretty much dead wrong. I thought that they were hiding some fantastic alien technology that they didn’t want any enemies getting their hands on, but the truth is that his memories of “Tahiti” came from a much more personal place.

In my review of the last episode, I hypothesized that perhaps Centipede wanted to get at Coulson so they could use whatever technology saved him to improve their super-soldiers. While it’s possible that is exactly what they wanted, or at least what Po thought they wanted, there was more to it than that. Once they introduced the clairvoyant, it seemed like things went in a completely different direction. The only thing I couldn’t tell was whether or not Raina’s intentions were as good as she claimed they were. Why would she care about helping Coulson get to the truth of what happened to him?

That truth turned out to be quite the surprise. S.H.I.E.L.D. wasn’t trying to keep government secrets from Coulson — they were actually trying to help him by planting those memories of “Tahiti” in his head. Watching him, with his skull open as that machine worked on his brain, as he begged to be killed, was heart-wrenching. Now that he’s remembered what happened, will he once again lose his will to live? Will he wish that they had just left him to die? Also, I cannot wait to find out who this mysterious woman was that he loved. I’m sure she’s still alive and I can’t imagine that it will be too long before he finds himself looking for her. I mean how can he not, right?

Without Coulson there to lead them, the team did a bang-up job of working together to find him. I thought for a minute there that maybe May was feeling some jealousy toward Skye when she suggested they throw Skye off the plane. But then I realized that didn’t make any sense since May is the one who has been trying the hardest to keep things between her and Ward pretty emotionless. When I realized what May was really up to, I felt like cheering. Of course she would know that Skye needed to be on her own to do what she needed to do and boy, was that ever correct. Skye kicked major butt in this episode and I was very happy to see that Coulson rewarded her by taking her tracking bracelet thing off.

Now that Coulson is back, everything will get back to normal, but that may not be possible now that he knows that truth, not to mention what will happen once they discover that Mike is alive and has been turned into a super-soldier by Centipede.

Just another day at the S.H.I.E.L.D. office.

Fitz-Simmons giving Skye a “sandwich” and Ward telling her exactly how long she had before the agents were coming to pick her up.

Finding out that Coulson lost his father when he was a kid.

Skye casually stealing a car and then figuring out a clever way to get herself back to its owner’s house.

The way Ward got Vanchat to talk. Gotta admit, that was pretty darn clever.

Skye introducing herself to Rathman as Agent Melinda May.

“No single agent is that important.”
“Coulson is.”

Finding out that Skye’s secret safe word was “manscaping.”

My heart breaking nearly in two when Coulson was begging to die, and then again when Skye begged him to come back to them.

What did you think after hearing the truth about what happened to Coulson after he died?