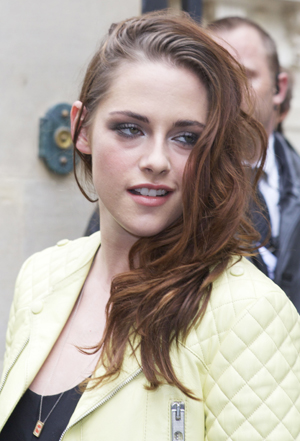 In the new ad for Balenciaga’s Florabotanica fragrance, Kristen Stewart posed nude once again, doing a near replica of last year’s ad.

In the ad, Stewart is shown nude in black and white with a vine of colorful flowers over her shoulder while holding a color bottle of the advertised fragrance. But unlike last year’s ad, the actress is facing the camera head-on, with the bottle resting on her temple.

In her 2013 advert for Florabotanica, Stewart also appeared topless, but her torso was facing away, with her head turned as she peeked over her shoulder toward the camera. She had the same color flower vine on her, but in this photo it was spreading over her back.

It seems as if both photos were taken during the same shoot last year and they just used a past image for the new 2014 ad.

Balenciaga first announced Stewart as the new face for their fragrance two years ago. “I love Balenciaga fashion because it is incredibly bold and forceful, yet feminine and sexy,” Stewart said at the time.

“I found there was a real creative freedom in this project,” she added. “I feel blessed and really proud to be the face of this new fragrance.”

Is stress causing Kristen Stewart to lose her hair? >>

Just last month, however, Stewart was named as the face of yet another big-name fragrance. Chanel announced that the Twilight star would represent their Métiers d’Art Paris-Dallas collection with an ad by Karl Lagerfeld in the works.

A new unique advert should be appearing in print and on the internet in the next few months, and it’s sure to be nothing that’s ever been seen before.