Lily Tomlin and her partner Jane Wagner have been together since 1971, and walked down the aisle nearly 42 years later. 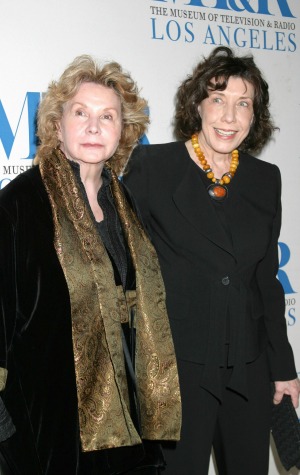 Comedian Lily Tomlin is finally married to her partner, Jane Wagner. The wedding took place in Los Angeles on New Year’s Eve, according to People.

Tomlin is now 74 years old, and Wagner is 78. Wagner is a writer, and that’s reportedly how the two met, back in 1971. Wagner wrote Tomlin’s one-woman show The Search for Signs of Intelligent Life in the Universe, which won numerous awards.

“We share similar feelings about people and about the world. She’s able to verbalize it and I’m able to physicalize it,” Tomlin told People of Wagner back in 1988. “She writes satirically but tenderly, and she loves farce and black comedy and broad slapstick. When you put all this together and make an audience laugh and be moved, it’s just glorious.”

With the many court cases and laws being passed around the country granting same-sex marriages, Tomlin told E! News back in August that she and Wagner were thinking of finally getting married.

“You don’t really need to get married, but marriage is awfully nice,” Tomlin explained. “Everybody I know who got married, they say it really makes a difference. They feel very, very happy about it.”

The news of Tomlin’s wedding was first shared by journalist and friend of the couple Liz Smith.

When the two talked about whether marriage was for them, they weren’t sure at first. But they knew if they were to do it, it would be for them and no one else.

“I know plenty of people who married and who are pleased about it and are happy,” Tomlin explained. “I guess if we had any kids, it would mean something more. Neither of us is religious, so that means nothing to us. I’m proud and happy for it, for people who want to be married. I suppose symbolically it would’ve been nice if we had gotten married for anybody who’s interested.”

Congratulations to the newlyweds!