Dennis Rodman had a temper tantrum on CNN during an interview about his controversial visits to North Korea — see the video! 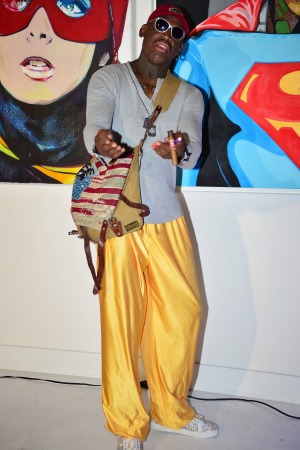 In an interview with Chris Cuomo on CNN, Rodman angrily defended his so-called humanitarian mission to the secretive and dictatorial nation, which has recently been in the news for troubling events, such as leader Kim Jong Un’s brutal execution of his own uncle and the kidnapping and imprisonment of U.S. veteran Kenneth Bae.

Rodman arrived for what is at least his second trip to North Korea with a contingent of about 50 U.S. citizens, including a basketball team who will play for Kim as part of his birthday celebrations. When Cuomo questioned Rodman about whether or not this was a good idea, the baller lost his mind.

“One day, one day, this door is going to open because these 10 guys here, all of us, Christie, Vin, Dennis, Charles… I mean everybody here, if we could open the door just a little bit for people to come here and do one thing.”

Fellow player Charles D. Smith tried to play peacemaker, defending Rodman’s angry stance. “We’ve been doing these games for 3½ years,” he said, explaining that the games are part of a “cultural exchange” designed to “put smiles on people’s faces” rather than influence politics. “Outside of what people know of Dennis, you don’t know Dennis. He’s got a great heart, his passion is about children and families, that’s why we are here.”

“We are here because it’s about doing great will around the world.”