Mike Rosenberg busked his way from the street to the arena, making him a Passenger on a ride we hope never ends. Here’s what we know about this insanely talented bloke. 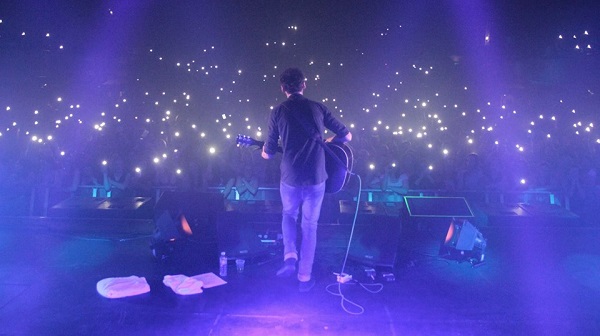 You know that sad and pretty acoustic song you’ve heard all over the radio lately? The one with the soft, accented voice telling you to “Let her go”? That’s Mike Rosenberg, better known as Passenger, and up until recently, he still spent time busking on the streets to help pay the bills. That’s all changed since “Let Her Go” has blown up on the airwaves, though.

More to hear: Listen up! Let Dan Croll into your home >>

“I haven’t had a house for five years, so it just means I’m touring constantly,” Rosenberg told HungerTV in a recent interview. “But it’s definitely stepped up a gear now and the gigs have gone from being 200 people to 2,000. There’s certainly a bigger pressure on it.”

Passenger wasn’t always a single performer on the road with a backup band. There was a time not that long ago when Passenger stood for an entire band. Like so many great bands do, though, the collection of musicians soon parted ways. That would be the point when most rides would end for a band. For Passenger, it was just the beginning. Since Rosenberg wrote nearly all the music and was always at the forefront of the band, it only made sense for him to carry on without the others. We bet they’re kicking themselves for ditching him now, huh?

“Let Her Go” is from Passenger’s fourth and most renowned studio album, All the Little Lights. Before All the Little Lights‘ 2012 release, Passenger’s albums were usually released on their own label and never charted or saw the light of day outside their own homegrown fan base. With “Let Her Go,” Rosenberg not only saw his audience quadruple in size but also saw his debut on the charts. Little Lights peaked in the second position in both Australia and Ireland and came in third in his U.K. homeland. Meanwhile, his breakout single “Let Her Go” has reached the top spot in eight countries and made it to the seventh spot in America.

Are his busking days over? Probably not. Though now, if he does it, it’s more for fun than funds.

“There is a lot less pressure busking because whoever wants to stop and listen, listens, and whoever doesn’t want to doesn’t,” Rosenberg told Pandora back in 2009. “There are no obligations. Whatever pops into my head I can play it. In venues there’s an understanding of what you should do because people are paying to hear you. Playing venues is wonderful because people sing along and get excited. On the other hand, it can cause pressure, [and] you want to give people their money’s worth. It’s funny, but I really enjoy both busking and playing venues.”

Want more music news, reviews and interviews? We’ve got a newsletter for that! >>

Rosenberg isn’t the first singer-songwriter to make a name for himself on the streets. Glen Hansard (of The Swell Season and Once) is still known to occasionally hit the streets for a round of busking. And “A-Team”‘s Ed Sheeran also started out busking the streets of London. So what’s next for this bearded, guitar-toting god? We happen to think his newest single is pretty sweet, too, and a little more uplifting than “Let Her Go.”