Zooey Deschanel grew up with the mean girls of Hollywood, but she realizes it made her the successful actress she is today. 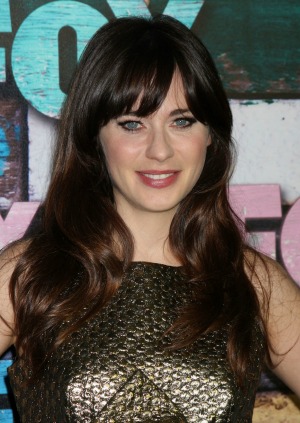 Zooey Deschanel always plays the fun, yet always wacky, girl and it’s easy to imagine that’s who she is in real life. The New Girl actress has come a long way since her days as a quirky child, and will be appearing on the cover of Elle for their February issue.

Zooey Deschanel: Girlie girls are smart and strong too! >>

Deschanel said that while growing up in Hollywood, “none of the kids I grew up with would have ever thought, ‘Zooey will be on television and have her own show,'” she said via People. “I wasn’t the world’s most popular child.”

Zooey and her sister Emily Deschanel grew up in the land of beautiful women, and mean girls. She said that her school years of dealing with them gave her a “built-in tenacity.”

Both sisters have become successful actresses, despite not being the prototypical Hollywood star (whatever that is). Emily currently stars on Bones, and Zooey is the star of New Girl. She has also starred in films like Elf and 500 Days of Summer. But it was her upbringing that gave her the tools to be the success she is today.

“Nothing has ever come easy for me, and I think that’s a really good thing,” she explained. “I learned at an early age that you have to work hard for what you get.”

While Zooey said she is way past school, social media offers an opportunity for people to revert back to their mean-girl days. She is working hard to stop people from using Facebook and Twitter to put others down.

“I have really stood up for myself on multiple platforms,” she explained. “It’s sort of the grown-up version of middle school nastiness, and I’m just like, come on. If there’s one thing I’d like to graduate from, it’s girl-on-girl hate. I don’t believe in it.”

Mindy Kaling, Amy Poehler and Allison Williams join Deschanel for the “Women in TV” issue of Elle. New Girl returns from the holidays on Tuesday, Jan. 7.