Evander Holyfield compared gays to the handicapped and believes they can be cured of what he calls their lifestyle choice. 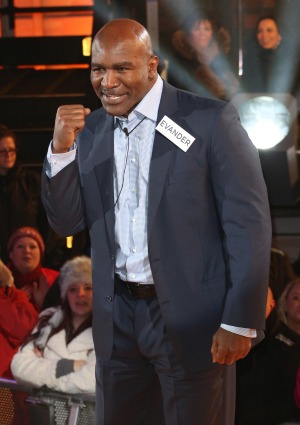 Evander Holyfield is in hot water for some homophobic comments he made in the Big Brother house — but while singer Boy George is slamming him, the boxer’s son is defending him.

Holyfield, a born-again Christian, dropped his shocking opinion on a recent episode of Big Brother. Asserting that homosexuality “ain’t normal,” the boxing legend continued, “If you were born and your leg were turned this way — what would you do? You go to the doctor and get it fixed back, right?”

Duck Dynasty star back on the air >>

“The only thing I’m trying to tell you is you know how handicapped people, you can’t say because they’re born that way you can’t move that… Yes, it is a choice.”

Producers called the boxer into a private room and reprimanded him for his comments, saying, “While Big Brother understands these are the views you hold, they aren’t the views that are held by a large section of society, and expressing these views will be extremely offensive to many people.”

“Big Brother does not tolerate the use of offensive language and must therefore warn you to consider very carefully the effect expressing such views may have and the harm and offense you may cause by repeating these views inside the house.”

The boxer’s son tried to defend his dad today, but may have only succeeded in digging a bigger hole for him.

“My dad is the most loving and caring person you will ever meet. He treats everyone like a human being, even if they are homosexual,” Ewin Holyfield told TMZ.

“My dad feels that being gay is a choice and naturally that’s how things work. You cannot procreate and make a baby with two women or two men. But at the same time, my dad is not going to judge someone for their sexual orientation.”

But not everyone was so forgiving. Culture Club lead singer and out gay man Boy George ripped Holyfield apart on Twitter, hinting he shouldn’t even be allowed in Great Britain to film the reality show.