With one successful franchise underway and another in the works, Star Trek actor Chris Pine is poised for mega-stardom. Here are a few must-knows about this talented (and hunky) People’s Choice nominee. 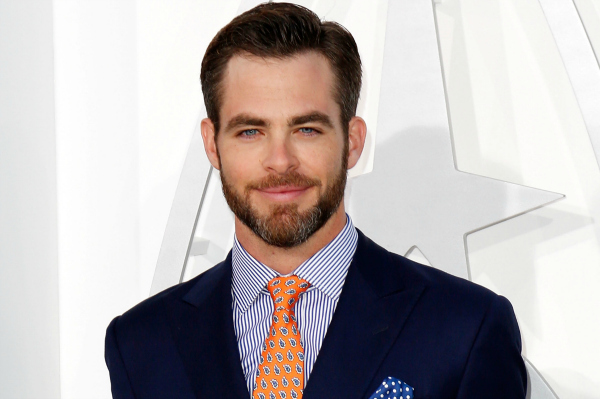 People kind of don’t know who he is

Hitting the club circuit in London, Chris Pine was gushed over by fans who totally thought he was someone else. A hostess at one club told him she loved him in The Hangover. Some random dude was psyched to be hanging out at the bar with Chris Hemsworth. Another couldn’t believe he was meeting Chris Evans. “I clearly haven’t made a good enough impression on people,” Pine told Men’s Journal the next day. “My go-to line when it’s the résumé game is that I’m either Chris Evans or Ryan Reynolds.”

It’s unlikely you’ll catch Pine updating his status or trolling his news feed on any social media site anytime soon. “No, f*** no,” he exclaimed to The Hollywood Reporter. “What am I going to tweet about? My sneakers? Or, ‘I have 14,000 friends on Facebook.’ What does that even mean? I find it to be a waste of time. The Internet is so caustic; just a place where people get to spew nonsense and bulls***.”

He’s a bit of a crybaby

Pine may play super-macho characters on the big screen, but in reality he’s a big softie. “I cry all the time — at work, at the shrink’s, with my lady,” the actor told Men’s Health in June. “The Notebook killed me. Up destroyed me. Up was like the animated Amour.” We’re not sure if he’s being serious, but we’ll take it. Sensitive and funny? Swoon.

He was an ugly duckling

Sure, he’s a stone-cold fox now. But Pine swears that wasn’t always the case, describing his younger self as “scared, pimply-faced, geeky, in huge coke-bottle glasses and a hat.” As such, he says, he wasn’t exactly a ladies’ man. “Just looking at a girl felt awkward,” he said to Us Weekly. “When you feel like an oddball, it never really leaves you. Even now, I’m better around people who are uncomfortable with themselves, the misfits.”

Show business runs in the family

Clearly, Chris is out to make a name for himself in the entertainment industry, but — not that he ever would — he has a pretty impressive family legacy to fall back on, too. His dad, Robert Pine, is still working in the industry as a character actor. You may remember him as Sgt. Joseph Getraer on CHiPs. His mom, Gwynne Gilford, starred in shows like Gunsmoke and CHiPs and films like Masters of the Universe and Beware! The Blob. Even his grandmother, Anne Gwynne, enjoyed a steady career — Universal Studios frequently hired her as a screamer for B-movies during the ’30s, ’40s and ’50s.

Ben Affleck believes in him

In 2005, Pine impressed director Joe Carnahan enough to land the role of a screwed-up speed freak in the crime caper Smokin’ Aces. Although the film didn’t launch Pine into mainstream stardom, many found his performance to be memorable — including co-star Ben Affleck. After a scene in which Pine does a ventriloquist shtick while standing over Affleck’s dead body, Affleck told Carnahan, “If I could take 10 percent of what I’m going to make the rest of my career and bet on somebody, it would be that kid.”

When it comes to Hollywood’s perpetuation of the perfect image, Pine wishes the industry would ease up. “The mass audience doesn’t want to see you if you aren’t perfect,” he lamented to Men’s Journal. “If you don’t look a certain way, if you don’t have big pecs and great skin and the perfect eyes. And it’s unfortunate, because kids are growing up with body image dysmorphia because not everyone is represented onscreen.” Hear, hear!

Elizabeth Banks and Chris Pine are People Like Us >>

When you grow up in Los Angeles among a famous family of actors, there’s definitely pressure to perform. For Pine, years of therapy have helped him deal. “I’m always calculating what I want to do, who I want to be, what I want to accomplish,” he elaborated to Esquire in an interview. “I don’t need to worry about that, that’s always there on a slow simmer. The muscle I have to work on is being more present.”

Spiders give him nightmares

In addition to fessing up to a childhood fear of the dark (which he joked didn’t end until about age 24), Pine recently copped to the one thing that always strikes fear in his heart. “Not a fan of spiders,” he said to The Huffington Post. “I saw the movie Arachnophobia which was single-handedly rated in the top three [worst] choices of my life.”

He’s grateful for what he’s got

Despite the pressure of belonging to an acting dynasty or the ever-present fear of picking the wrong role, Pine knows he’s got a pretty sweet thing going. “Sure, the auditions and the rejection — if you’re a sensitive personal at all, it’s f*****g brutal,” he said. “But, if you can work in this town, it’s a joy. You just have to keep your focus. LA’s a pretty warm, easy, breezy place. You can sunbathe, get a mai tai and wake up five months later. And it’s still sunny. And they’re still serving mai tais.”