The Bachelor‘s Juan Pablo met Cameron Diaz and the stars of Girls on the set of Good Morning America Monday morning. 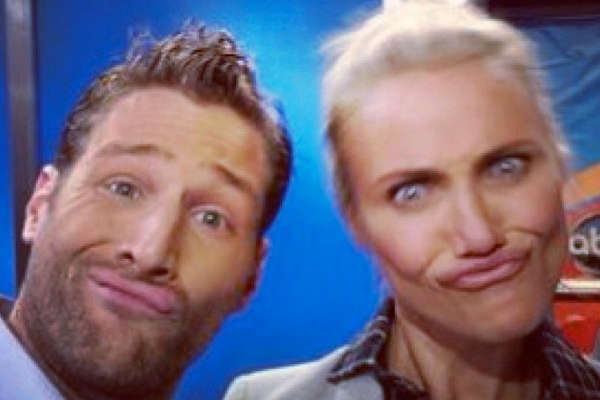 The fun group shared some good times while appearing on GMA and posted a few photos as evidence of their backstage party. First up, the reality love-seeker Instagrammed a picture of himself with Diaz as they made funny faces together.

Juan Pablo 101: Get to know the new Bachelor

“YEAP. @camerondiaz has a BETTER duck face than MINE…” Galavis wrote on the caption along with the image, following with a translation in Spanish. “/ SIP, Cameron Diaz hace MEJOR la cara de pato que YO…”

In the photos, Galavis and Diaz both look at the camera with pursed lips, making hilarious duck faces.

Next, Dunham posted a photo of her co-star Williams with the Venezuelan heartthrob, in which the actress was so excited, she misspelled his name. “Allison met Juan Carlo aka DA BACHELOR and her eyes went red with passion.” Quickly realizing her error, she added: “UPDATE: his name is Juan Pablo and he’s a delight. I can’t even make a joke. It’s confusing.”

Galavis’ turn on The Bachelor began on Sunday night with a special episode featuring his current life in Miami. While on GMA, the single father of one dished on what’s to come for his season, which begins on Monday night, and he spilled on a few details.

Cameron Diaz and Jason Segel to star in Sex Tape

“I knew it was going to be hard. It’s not easy to make a decision… ” Galavis said when asked about having to cut girls out as he makes his choice. “I hate hurting people. I was like, ‘Do you really want to do this? Do you really want to get into trouble with this?’ I knew I was going to have to hurt people, sending people home, so it was very hard.”

While Galavis does not say whether he finds love at the end of the show, it is unlikely, given his charm, that he won’t end up proposing to someone on the finale.