Maxim has their eye on Eva Longoria. After a year of personal and professional triumphs, she’s been given a special honor. 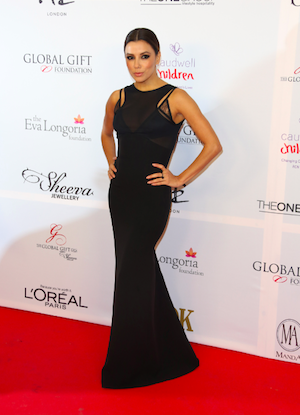 Maxim is kicking off 2014 with a new Woman of the Year. Monday, they announced the title belongs to 38-year-old Eva Longoria.

Longoria’s had a long and eventful history with Maxim. Back in 2005 and 2006, she topped their famous Hot 100 list. But there’s something about this year that’s sentimental for the actress.

“It’s especially awesome after how long it’s been since my first cover,” she said via Us Weekly. “I’ve had a beautiful relationship with Maxim over all these years.”

Longoria oozes sex appeal, but she’s not all vixen all the time. The actress tells Maxim she’s definitely a homebody. “One thing people are usually surprised about when they get to know me is how domestic I am,” she continued. “So when you see the sexy Maxim cover and then you put it against me in an apron with flour in my hair, it takes a moment to reconcile that image.”

Not only is Longoria an actress, she’s also an accomplished businesswoman and academic. She recently graduated from California State University with a master’s degree in Chicano Studies. She’d just finished her thesis before being interviewed by Maxim.

“I was like, ‘My brain can’t jump that fast from a Maxim interview to a thesis!'” she joked. “Back in high school I really was the chameleon, too. I got along with the honors math club, then I would go to cheerleading practice and then I was a band geek as well.”

The latest issue of Maxim is on sale Jan. 17.