World-famous magician David Copperfield has cast a spell on Chloe Gosselin and the smitten pair has finally revealed that they’re engaged. 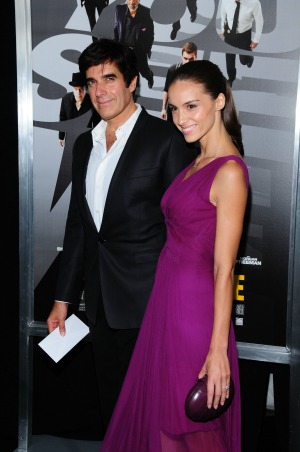 The couple has have known each other for six years already and are clearly in love as well as already having started their little family together. They share a beautiful little 3-year-old daughter Sky.

The couple may be extremely dedicated to each other and preparing to wed, but this isn’t the 57-year-old magician’s first serious relationship. In the ’90s he had another very high-profile relationship with the beautiful supermodel Claudia Schiffer.

Copperfield has definitely moved on from his past relationship and was very happy to gush about his fiancée in the latest issue of Britain’s HELLO! magazine, saying, “Oh, that was a long time ago. Now I’m engaged and in a committed relationship with Chloe in my mind and my heart.”

The happy couple did the interview together at Copperfield’s luxurious Caribbean hideaway, Copperfield Bay, an archipelago of 11 islands. The veteran entertainer wasn’t the only one to gush about his love — Gosselin was just as excited to say how happy she was with her man.

Gosselin gushed, “I’m so lucky to have found David.

“There are very few people in the world like him. He’s spent more than 30 years at the top of his profession. He’s achieved some extraordinary things.

“People come up to him, tell him they admire him, that he’s a role model for them — and he just smiles, because he’s truly modest. It’s as if he doesn’t realize how smart he is, the talent that he has.”

It’s not just his profession that the brunette beauty is thrilled with but also that her beau is such a wonderful father.

The 28-year-old model said, “David is such a good father. He and Sky are best friends and it’s amazing to see how the relationship between them keeps developing and growing.”

Congratulations to the very happy couple.