Drew Barrymore has been in the public eye since she was a kid, but she finally feels like she has the life she’s always dreamed of. 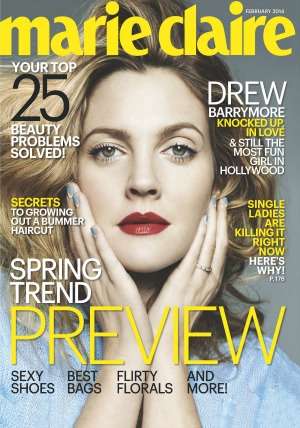 Drew Barrymore may be the poster child for reinventing one’s self in Hollywood, but at the age of 38, she now knows who she is and is happy with her life.

The actress married Will Kopelman in June 2012. Barrymore had been in a series of long-term relationships before meeting Kopelman, but it seems she finally has found the right one. Her new husband said when he met Barrymore, he knew it was meant to be.

“Sometimes whom you least expect is the person you fall for,” he told Marie Claire for its February 2014 issue. “It was a combination of moments: watching her with my nephew. Traveling with her. Going to museums with her. I knew, adding them up, this was it.”

Barrymore not only fell in love with her husband, but she fell in love with his family, too. The actress grew up as a Hollywood legacy, but it didn’t offer a very stable home life. As a child star, and then a teen, she reacted to her surroundings.

“When I was a kid, everything was so unplanned, my parents were so erratic and my world was so inconsistent,” she told the magazine. “I was 14 when I moved into my own apartment. I was so scared. I didn’t know anything. I didn’t know you had to throw food out when it rotted in the fridge. I was convinced someone was going to crawl through my window. I would go to the Laundromat and sit there reading Anne Sexton, Sylvia Plath.”

That type of upbringing changed Barrymore’s views on family, and she felt she’d never had the type of family she really wanted. The Kopelman family has offered her that chance.

“I didn’t think I would ever get to experience that,” she explained of the Kopelmans. “This is so safe and positive and healthy because they have their values intact. It was huge for me. And that’s what I want for my family.”

Barrymore is pregnant with her second child, but said she would be open to having baby No. 3. She can next be seen in Blended with Adam Sandler.