NBC celebrates Jimmy Fallon’s move to The Tonight Show with a look back at great moments in the show’s and Fallon’s history. Will you tune in for the new host? We will! 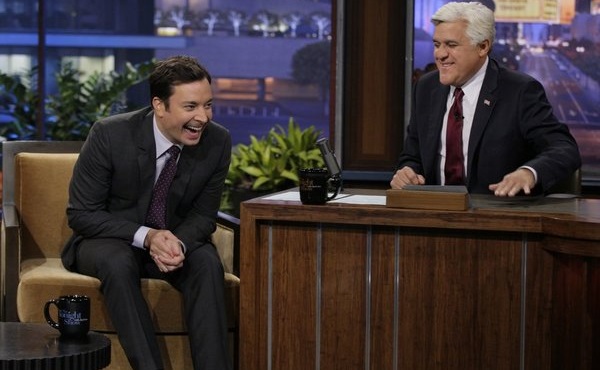 The dawn of an exciting new era is fast approaching. Jimmy Fallon will fill Jay Leno’s The Tonight Show seat in a little more than a month. While Fallon fans and Leno frenemies are certainly thrilled, no one seems more excited about the changeup than NBC. The network just unveiled an exciting new promo that features a lot of throwbacks to old-school Tonight Show — starting with the very beginning, skimming quickly over that much-contested Conan O’Brien stint and segueing straight into Late Night clips of Fallon and guests — as if preparing everyone for what is sure to be a much funnier version of The Tonight Show than what we’re currently watching with Leno at the helm.

From Jack Parr and Johnny Carson to Leno and O’Brien, the promo shows it all. But even NBC seems vaguely aware that Leno’s era doesn’t ring familiar to the current generation. The clips of Leno are short and sweet, and they rarely showcase Leno as the star. (We watched the clip twice before we noticed it was Leno with those seals.) As a matter of fact, other than the bit about the typo in the forecast, Leno’s biggest moment in the promo comes when he’s introducing Fallon.

That’s no surprise: This isn’t NBC’s first attempt to get rid of Leno. If you remember, they tried replacing him with Conan O’Brien back in 2009, but the move didn’t stick. Lackluster numbers saw O’Brien receive a huge payout to leave so that Leno could return to the desk. Was it really a love for Leno that brought the bad ratings, or was it just that the move came slightly too early? O’Brien and Fallon reached roughly the same demographic and generation of fans. However, perhaps those fans were still too young to understand the importance of bringing their loyalty to O’Brien’s new timeslot. Now older, perhaps wiser and partying slightly less, will those same viewers follow Fallon to The Tonight Show? NBC hopes so.

Jimmy Fallon officially takes over on The Tonight Show on Feb. 24, and we cannot wait.