Netflix has released a new promo for House of Cards Season 2. Are there any hidden messages in the short GIF showing Kevin Spacey simply playing with a rubber band? 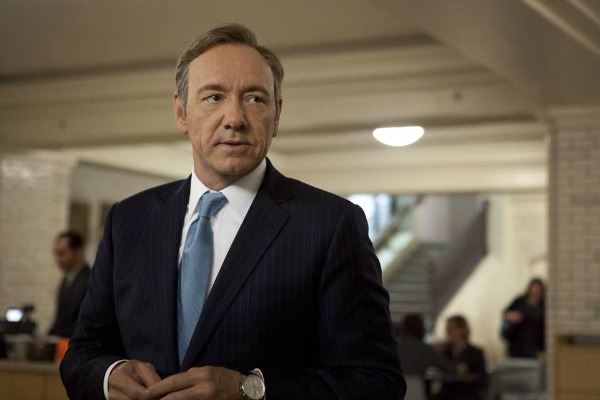 Netflix is getting pretty good at being able to get fans all in a tizzy over promos that basically reveal nothing. Last month, the media provider revealed the first promo for House of Cards Season 2, and though the promo didn’t have much more in it than Claire Underwood (Robin Wright) slowly and silently smoking a cigarette, fans rushed to watch it as soon as it became available.

The second season of the hit series premieres on Netflix on Feb. 14, making it a great Valentine’s Day present for fans who want to spend the day binging on their favorite show. Who needs romance on Valentine’s Day when you can sit back and watch all the sex and corruption that is sure to come in House of Cards?

According to Netflix, Season 2 will concentrate on Francis and Claire’s ruthless efforts to continue their rise to power. It won’t be easy for the pair, though, as they’ll soon find threats closing in from all sides. Francis will also find that he’s got to deal with an up-and-coming reporter named Zoe Barnes (played by Kate Mara), who is getting closer to the truth about his crimes. Then there’s the trouble that will be caused by a friend of President Walker’s, a man named Raymond Tusk (played by Gerald McRaney), who demands that Francis give back some political favors or face retribution.

All in all, it sounds like House of Cards is going to take things up a notch in Season 2. The newest promo is actually a GIF that was posted on Reddit. It came courtesy of showrunner Beau Willimon, who posted the following message along with the promo:

Yo Reddit, I’m Beau Willimon, showrunner for House of Cards. We created a slew of cinemagraph GIFs for Season 2 and I wanted to share this one with you first. Just a taste for now, but lots more to come, so keep your eyes peeled, your ears to the ground, and your smart-devices at your finger-tips.

The short GIF simply shows Francis Underwood (played by Kevin Spacey) kicking back with his feet on his desk and slowly flexing a rubber band. It’s a short clip, to be sure, and yet it is just as intriguing as the first promo.

Check out the new promo below.

What do you think of the promo for House of Cards Season 2? Do you plan to binge-watch the entire season when it premieres next month?