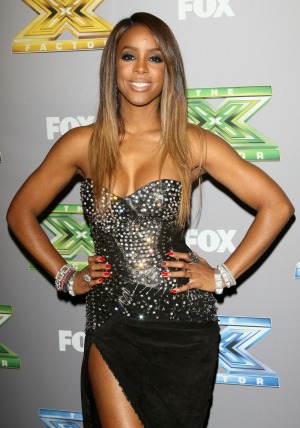 Kelly Rowland‘s wedding to manager Tim Witherspoon will not be a lavish affair for the record books, but that doesn’t mean the songstress isn’t showing the tiniest hint of bridezilla tendencies.

Opening up about crushing acquaintances’ hopes for scoring an invite to the upcoming nuptials, the bride-to-be took a jab at “nosy” guests.

“It’s all good,” Kelly Rowland recently said nonchalantly when asked about her wedding plans, adding she hasn’t yet picked a date to marry Witherspoon.

Elaborating just a tiny bit about what kind of ceremony is in the works, the former Destiny’s Child singer added, “You know, I think we just really want it to be us and our pastor. That’s it. I mean, we are the only two that’s going to be in the marriage.”

While that line of thinking may make perfect sense, she added in jest, “You have to pay for food for everyone, and I’m not down with that.”

However, those aren’t the only reasons the guest list is going to be micro-sized. Rowland went on to tell Hollywood Life, “Everyone is there just to be nosy and see who I’m wearing.”

Though some took the small wedding news to mean Kelly Rowland was planning to snub musical counterparts Beyoncé and Michelle Williams from the affair, the girls are undoubtedly still close to the 32-year-old Talk A Good Game singer’s heart.

Reflecting on 2013 while tweeting to fans, she recently shared, “One of my highlights this year was definitely performing with my sisters at the Super Bowl!”

Does Kelly Rowland have a valid point about “nosy” guests?