Ellie Goulding is one of showbiz’s most eligible bachelorettes, but the reason she’s single is because men want to immediately make her their wife.

Related story Emily Blunt Reveals How Having a Stutter Shaped Her: 'You Absorb the World in a Different Way' 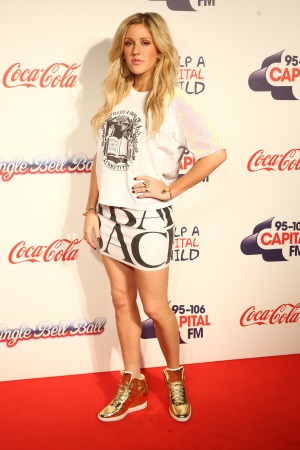 Ellie Goulding is one the most talented and beautiful young singers in showbiz right now, but she has an unusual issue when it comes to the men: They don’t want to date her — they want to marry her.

The “Burn” hit maker, who is currently single, willingly revealed to Marie Claire magazine just why that is. Goulding said, “People seem to think I’m more wife material than girlfriend material. That’s probably why I’m single! People want to marry me — and nothing before it.”

The 27-year-old beauty has been linked to several gorgeous men in the past, but her most memorable romantic link was none other than One Direction heartthrob Niall Horan, and we’re pretty sure no woman would ever say no to Horan putting a ring on her finger.

The “Anything Could Happen” singer has been hailed as a good role model for young woman and appears to have quite the good girl reputation, which perhaps adds to why men want to wed her. However, Goulding hinted that she may not be as good as we had originally thought.

She said, “People might think I am [innocent] but I’m not. I’ve been quite clever about what gets in the press but I’ve done some stupid things, some reckless things. A few too many drinks have caused a lot of things to happen.”

Goulding may be considered wifey material, but for now she is perfectly happy to be on her own. Although, she is not ruling out the possibility of a wedding in the future.

The singer said, “Well, it might be nice to have a wedding one day, mightn’t it? I quite like being by myself. What’s wrong with that?”