These days, Martin Scorsese and Leonardo DiCaprio are a package deal. It’s no wonder they were both chosen as recipients of the Cinema Vanguard Award. 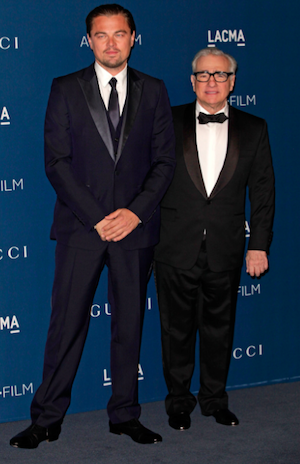 After over 10 years of working together, the director and actor are being honored by the Santa Barbara International Film Festival. The duo will receive this year’s Cinema Vanguard Award. According to The Hollywood Reporter, Scorsese and DiCaprio will be presented with their statues Feb. 6 at Santa Barbara’s Arlington Theatre.

In regards to why they were selected, SBIFF’s executive director Roger Durling said, “Scorsese and DiCaprio’s partnership has become a legendary cinematic pas de deux recalling other great collaborations like John Ford and John Wayne, Fellini and Mastroianni, John Huston and Bogart — and even Scorsese and De Niro.”

Leonardo DiCaprio donates $3 million to save tigers in Nepal >>

Scorsese and DiCaprio’s list of films include Gangs of New York, The Aviator, The Departed and Shutter Island. The latest, The Wolf of Wall Street, opened on Christmas Day and has been nominated for multiple Golden Globe and film critics awards.