Lady Gaga went topless posing for a sexy Versace ad as the new face for the fashion house. 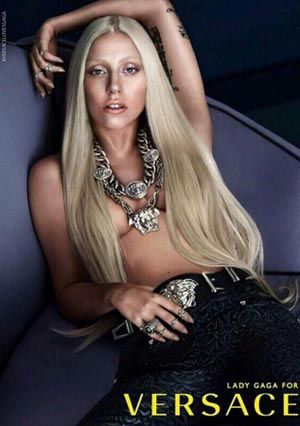 Lady Gaga is the new face of Versace and to kick off her campaign with the popular edgy brand, the singer posed topless for a very sexy advert.

As a treat to her fans, Gaga posted the photo on Twitter Wednesday night with the caption, “Happy New Years from HAUS OF GAGA and @Versace!”

In return, Versace tweeted their own message about the photo replying with: “A special Happy New Year to the most glamorous @ladygaga !!!!!”

In the photo, Gaga is posing with her long blond hair covering her breasts while two chunky silver necklaces lay on her chest, allowing just a bit of boobage to show through. Additionally, the singer is wearing a pair of tight pants and a belt with a big silver buckle.

The 27-year-old multi-award-winner was named as Versace’s spring/summer campaign face this past November, announcing her new position with another gorgeous photo. In that picture, Gaga is seen lounging on a couch wearing a glamorous lavender dress that hugs all her curves and shows lots of skin.

Apparently, this was the same look she wore at the 2013 American Movie Awards, just one day after the photo was released to the public, E! News revealed.

Of course, the new topless photo was definitely not the first, or only, time Gaga exposed lots of herself to the public. Just recently, Mother Monster released a revealing film to promote her new album, ARTPOP. The short movie shows the singer in all kinds of undressing phases, as well as some odd clothing ensembles, including a moss outfit and a wedding gown.

Gaga described her album as a “celebration, my pain exploding in electronic music. It’s heavy, but after I listen to it, I feel happy again. I feel lighter.” The film is NSFW, but it shows Gaga’s true, if not raw, spirit, along with her endless creativity.