Ke$ha drowns in glitter and shares her bits and pieces in her brand-new video for “Dirty Love.” If you’re shocked by this, you shouldn’t be. 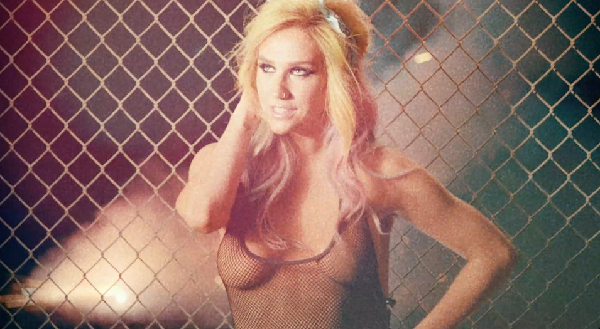 Ke$ha‘s video for “Dirty Love” is far from the most scandalous thing we’ve seen on YouTube or MTV. As a matter of fact, the singer-directed video is relatively tame in comparison to what we’ve seen on the video channel and during awards ceremonies lately. However, we do see Ke$ha strip down to her knickers in the video, seemingly hump the floor and writhe around in a mesh shirt. Before you judge too harshly, take a look at the video.

As for the video itself, we think the naysayers need to take a chill pill. First and foremost, let’s point out the obvious: Ke$ha is not humping a midget (or Robin Thicke). Nor is she pleasuring herself. In essence, she’s just a girl dancing for a guy whose attention she wants. We’ve all done it. Some of us just leave on a few more layers. She’s not exactly naked, though. If you pay attention, that oh-so-scandalous mesh top is either lined or she’s wearing pasties. Either that or Ke$ha doesn’t have nipples. And that underwear and bra? Actually pretty cute. We’d kill for that awesome sparkly strapless bra.

As always, Ke$ha has not only given us some interesting and crazy viewing material, but she’s released a song we’ll be dancing to for months to come. We love that primal scream and the strange addition of the somehow gospel tones in her voice as she repeats, “You’re not my daddy. Baby, I’m full-grown.” And while one line does reference “getting in between your cheeks” it’s still less risqué than some of the other stuff we’ve heard in recent years. Rihanna’s “Rude Boy,” anyone?

Furthermore, the lyrics might even be heard as kind of inspiring. Think about what would happen if we reversed some of the lyrics: She wants his money, she needs a man, she wants someone to play the part of her father and take care of her because she can’t do it herself. Not exactly a message we should want teenagers putting out there. Wouldn’t you rather have them be independent and happy taking care of themselves than desperately seeking a savior in the form of some smarmy dude? In “Dirty Love” Ke$ha is without a doubt the anti-TSwift. And, you know what? We kind of love it.

Say what you want about the grubby, glittered goddess. We know she has her strange moments. However, with Ke$ha on our radar, life is never dull. Listen to the song again. Try not to dance. And find something new to complain about today.