At the turn of the new year, Ryan Seacrest kissed the singer who dominated the news in 2013. See the photo! 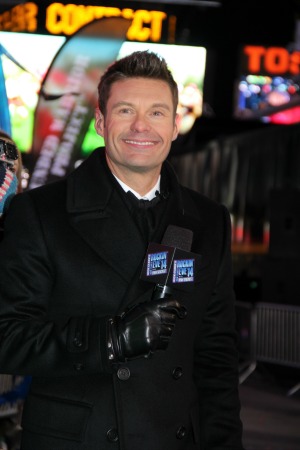 This was the first New Year’s Eve in awhile that Ryan Seacrest was single. As host of ABC’s Dick Clark’s New Year’s Rockin’ Eve, he could have his choice of ladies lined up in Times Square for his midnight kiss. So who was the lucky gal?

The TV host chose a young lady who defined pop culture in 2013 — Miley Cyrus. The 21-year-old was one of the headline performers on the iconic show, so the two took the opportunity to ring in 2014 with a smooch and it was all caught in a photo.

Is Miley Cyrus a marketing genius or completely crazy? >>

While the television cameras did not capture the moment, an ABC photographer did grab the fun image. In fact, Cyrus was the one who tweeted it out and revealed the kiss to the world.

The photo shows the “Wrecking Ball” singer cupping Seacrest’s face at the stroke of midnight. He’s clutching his microphone because the broadcast was still going on. Behind them, the people in the huge crowd were too busy with their own midnight embraces to notice what was going on the stage in front of them.

Yay!!!! They caught our NY midnight kiss! Happy New Years @RyanSeacrest & thank you for having me 🎉💋🎉💋 pic.twitter.com/eaFPCvMN2d

Cyrus wore more clothes on the show than she had all year. She had on a gold-sequined jumpsuit covering a floor-length white fur. Temperatures in New York City, New York, dipped below freezing on Tuesday night, so it was too chilly for her usual bikini briefs.

The photo might become an iconic moment in time with 2013’s most talked about celebrity and the busiest man in show business. However, don’t expect to see these two in the tabloids about their dating status. It was just a fun midnight kiss.