Rachel Nichols has even more to celebrate in 2014. She’s just gotten engaged to her beau Michael Kershaw. 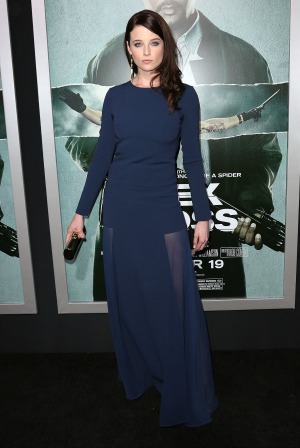 The festive season has certainly been the top pick for celebrity engagements and countless stars have recently decided to make a declaration of their love by either tying the knot or accepting romantic engagement proposals.

And things are no different for Continuum actress Rachel Nichols because the brunette beauty has just gotten engaged to her beau Michael Kershaw.

The sci-fi television star had something extra special to celebrate at the start of 2014 and was thrilled to announce the news of her engagement via Instagram on Monday.

Leona Lewis says no to a Christmas proposal >>

Nichols posted a picture of her and the love of her life looking very content and sporting a very impressive engagement ring. The adorable snapshot was simply captioned: “Engagement Drinks: Thanks for all the well-wishes!”

Nichols also took to Twitter to thank her fans for their support and to gush about her newfound happiness. She wrote, “Thanks for all of the kind words about our engagement… 2013 is my favorite year although I don’t doubt there are even better years to come.”

The actress definitely appears to be thrilled with her engagement and we can’t wait to see her walk down the aisle, although, this is not the first time that Nichols will be tying the knot. The Alex Cross star was previously married to Star Trek producer Scott Stuber back in July 2008, but the former couple decided to end their marriage just seven months later.

James Blunt has finally gotten engaged to his girlfriend >>

We hope that it’s happily ever after for Nichols this time around and offer a big congratulations to the happy couple!