Dwyane Wade admitted that he had a son while on a break with fiancée Gabrielle Union. How is the couple handling the situation? 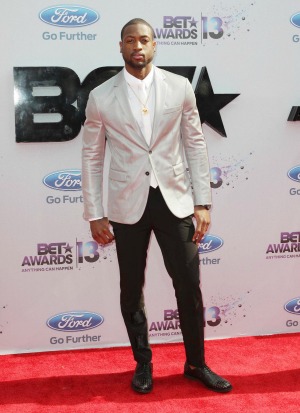 Who knew the classic excuse of “we were on a break” from a Friends episode would be the same explanation Dwyane Wade gave about the birth of his new son? In a press conference before his basketball game on Monday, the athlete took ownership of the fling that occurred when he and fiancée Gabrielle Union took some time apart.

“I’m in the public eye, so obviously that’s a part of it. It comes with the territory. But… as I’ve always done my whole life… is always focus on what’s most important to me and my family, and that’s being a great father. I’ve always tried to show my importance in my kids’ lives and it doesn’t change now,” Wade said. “So, me and my lady and my family have continued to move forward and I think that’s evident with the ring and the proposal that I gave her with our lives.”

Find out what Kate Winslet named her baby boy >>

He proposed to Union the weekend before Christmas with a gorgeous 8.5-carat ring. The couple also showed a unified front by sending out holiday cards from the “Wade-Union Family” this year.

Yet the Miami Heat player sees some very positive things from the unplanned birth.

He revealed, “I had a time apart in our break, in our pain and our hurt, a blessing came out of it in my life, having a son that was born healthy. So, I’m moving on.”

Beyoncé lost 65 pounds after giving birth — to prove a point >>

Wade is raising his two sons, Zaire, 11, and Zion, 6, from his first marriage to Siohvaughn Funches in addition to having custody of his nephew.

Union was out of the country and away from the media frenzy when the news became public. The Being Mary Jane actress is on vacation with her gal pals. She even posted a photo of her fit bikini body on Instagram with the caption, “Dance like no one is watching… #islandliving #livingmybestlifeonmyowndamnterms”

So while the press went a bit crazy over the news, it is clear the couple has privately worked out their issues. They are moving forward and looking ahead to their bright future together.