Rihanna has taken a well deserved break in Barbados, but it hasn’t all been about relaxation for the star — she caused chaos with the pigs on her uncle’s farm. 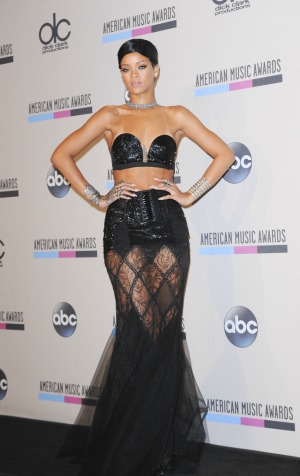 Rihanna may be a very successful pop star, but she may not be so successful at farming. The “Diamonds” singer reportedly caused havoc on her uncle’s farm in her native Barbados.

The “We Found Love” singer was not afraid to get down and dirty and help with feeding the pigs. However, RiRi apparently got bored and started messing around, which caused several animals to freak out and escape from their pens.

A source revealed to the Daily Star newspaper that, “Rihanna was happy to work with the animals but soon she started giggling and messing around.”

“Unfortunately, because she wasn’t paying attention, she didn’t realize a couple of the gates were left open.”

“As a result, some of the livestock escaped and ran wild around the farm. It caused hours of commotion trying to round them up,” the source said.

However, instead of getting angry, the singer’s family was thrilled with her antics and stood and laughed at the pop sensation as she ran around the farm trying to recapture some of the escaped animals, including pigs and chickens.

The source continued, “She even fell over a couple of times and got covered in mud — or possibly worse!”

“And once it was done she celebrated with plenty of rum.”

If only we were there to witness one of the most glamorous superstars running around in the muck and chasing pigs. We hope RiRi has a much deserved break with her family in the Caribbean.