Pattie Mallette is a mom to millions of Beliebers, and is ready for whatever Justin Bieber’s crazy life has in store next. 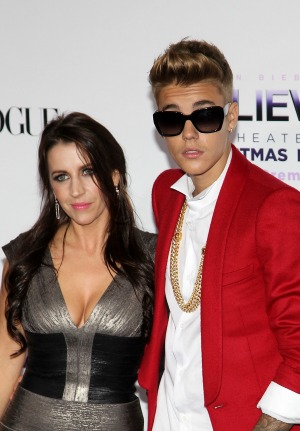 It seems like Justin Bieber has been around forever. So it may be hard to believe that it was only a few years ago that he was an unknown singing in his mom’s basement in Canada. When Bieber was 16, he released his first film Never Say Never, and now he has returned to the big screen, this time for Believe.

Justin Bieber finds love in the form of a new puppy >>

Bieber’s mom, Pattie Mallette, said it has been a couple of “whirlwind” years for their family.

“It’s really fun watching him grow and transition,” Mallette told MTV. “It’s just been this crazy whirlwind, and I’m just along for the ride.”

Mallette was only 17 years old when she became pregnant with Bieber, and recently wrote a memoir about her life. His parents never got married, but both remain in their son’s life. For Believe, Bieber is now a 19-year-old who has been seriously considering retirement — even though his management continues to deny his claims.

During the interview, Bieber embraced his mom and showed his admiration, saying, “How beautiful is my mommy?”

But Mallette knows her son is an adult, and is going through what many other parents go through — trying to let her child go.

“When your kids hit a certain age, your parenting style changes and it is hard letting go,” Mallette told People back in August. “His life was my life and now I’ve had to let him go a little bit and let him be independent. It is hard to not be able to control everything that your adult child does.”

Mallette is a young mother of a pop star, at only 37 years old, and has embraced her role as the mother of all Beliebers.

Stage moms face-off: Who loves a little too much? >>

Bieber has had a troubling couple of years, but he may just be going through growing pains many teens eventually go through. Even so, Mallette said that “every parent worries.”

“I text and call him every day. I definitely want to know everything that he is doing and what he is going through so I try to talk to him as much as he’ll let me,” she explained. “I mean, he’s on tour and being pulled in a million different directions, but we talk as much as he is able.”