Tim Tebow may not be a starting quarterback in the NFL, but he’s still in the game. Tebow’s heading to television thanks to ESPN and their upcoming SEC Network. 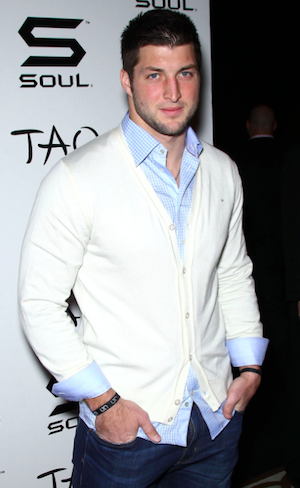 Don’t cry for Tim Tebow, his career is going in a new direction. The NFL free agent, who previously played for the Denver Broncos and New York Jets, is still looking for a new home. But he isn’t twiddling his thumbs waiting for an offer.

Tim Tebow would like to try his hand at politics >>

According to E! News, Tebow has signed a broadcasting deal with ESPN. He’ll trade in his football gear for sharp suits as a college football analyst for the pregame show SEC Nation (premiering Aug. 28).

“I am so excited that ESPN has given me this incredible opportunity,” said Tebow. “When I was six years old, I fell in love with the game of football. And while I continue to pursue my dream of playing quarterback in the NFL, this is an amazing opportunity to be part of the unparalleled passion of college football and the SEC.”

Even though Tebow has a new full-time job, it hasn’t hindered his NFL dreams. He still wants in on the action. As for the SEC Network, they hope Tebow can make them stand out amongst the competition.

“Tim is a SEC icon with a national fan base and broad appeal. He will be a significant contributor to the compelling content we will deliver with the SEC Network,” Justin Connolly, Senior VP of programming for college networks at ESPN. “Tim brings a wealth of knowledge about the game, the conference and the passion among SEC fans.”

Will you tune in for Tebow?