Whether you plan to hit the club on New Year’s Eve like Rihanna or hang out at home with your loved ones like homebody Blake Lively, we’ve got you covered with two apropos hair tutorials. 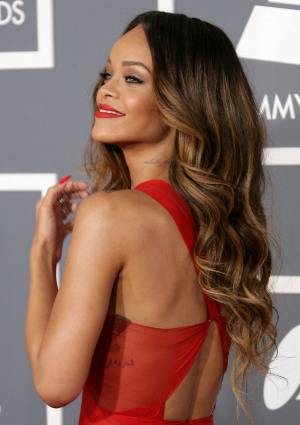 If you plan to party it up

If you’re the type who likes to ring in the new year with a bang, you’ll likely be hitting up one of your local hot spots to watch the ball drop or — if you’re lucky — heading to the Big Apple to count it down at Times Square. In which case, you’ll be in good company.

This year, Jenny McCarthy will be co-hosting Dick Clark’s New Year’s Rockin’ Eve with Ryan Seacrest 2014 in New York City, New York — and a slew of other party-lovin’ celebs will be on hand to perform, such as Blondie, Miley Cyrus, Ariana Grande and more.

And they aren’t the only ones heading out and about to usher in the new year in style. Rihanna has recruited her model BFF, Cara Delevingne, to spend New Year’s Eve at Jay Z’s 40/40 Club. Britney Spears, who is scheduled to perform in Las Vegas at Planet Hollywood Resort Hotel at 10 p.m., plans to book it to a swanky restaurant like Koi to count down to 2014.

So if you’re planning to party it up on Dec. 31 like Rihanna or Spears, you’re going to want a hairstyle with staying power — and, obviously, one that looks fierce. And nothing oozes sexy party appeal like loose down curls! Celebrity hairstylist Patrice Bisiot shows us how to get the look.