It looks like Miley Cyrus has moved on from her ex-fiancé, Liam Hemsworth. Is Hemsworth’s buddy Kellan Lutz the new guy? 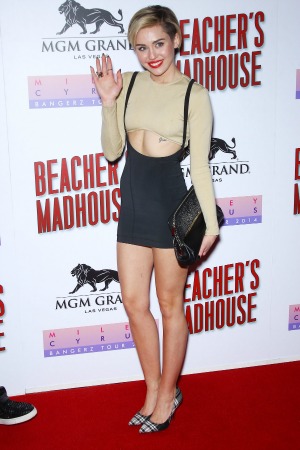 It was a big night in Las Vegas on Friday with the premiere of Britney Spears’ show at Planet Hollywood and the opening of Beacher’s Madhouse at the MGM Grand. While Miley Cyrus was at both events last night, it was the company she was keeping that raised a few eyebrows.

Rumors have been swirling since early December that the 21-year-old is dating Twilight star Kellan Lutz. According to Us Weekly, the romance is on.

A source told the magazine, “The next day, they hung out. And they’ve been hooking up ever since.”

The interesting note to the Lutz hookup is that the Legend of Hercules star is friends with Cyrus’ ex-fiancé, Liam Hemsworth. Apparently, the bro code of staying away from your friend’s ex-girlfriend doesn’t count for these two.

The couple was spotted in the Bahamas and Miami in mid-December and at last night’s Las Vegas festivities. They kept their distance early in the evening, but the 28-year-old actor couldn’t stay away. He made his way over to the petite singer around 2:30 a.m. at her VIP table at the club.

“They talked at very close range for a long time while Miley was laughing and rubbing his back,” an insider told People. “At one point she kissed his ear.”

The duo left at the same time, but they did a pretty good job of keeping their exit nonchalant.

“They left in the same large group, but Kellan was a few steps behind her the whole time. Most of the people chasing after Miley didn’t even notice him right behind her. He did a pretty good job of blending in,” revealed the source.

There’s no word on how Hemsworth feels about this new coupling, but Cyrus is proving that she has moved on from her ex.