Count Shailene Woodley among the many who felt unnerved by The Fault In Our Stars‘ “sick” movie poster tagline. The film’s main star weighs in on the four little words that have divided the story’s fans. 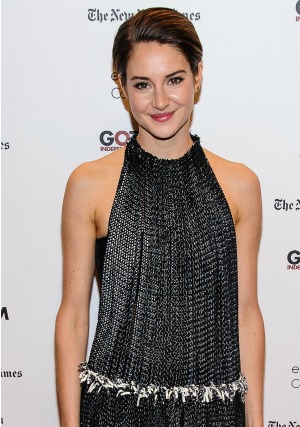 Shailene Woodley‘s true feelings about The Fault In Our Stars‘ movie poster tagline are trying to come out. The star of the upcoming film, which is based on John Green’s hit novel, has very carefully voiced her opinion on the controversial topic.

Referring to the movie’s recently debuted poster, which includes the tagline “One sick love story,” the young actress who plays lovestruck cancer patient Hazel carefully told Entertainment Weekly, “I had a really strong response to it.”

The Fault In Our Stars‘ sick tagline: Can you handle it? >>

Seeming to tiptoe around the topic while balancing her real feelings and a desire not to offend whoever chose the movie tagline, Woodley continued, “It’s definitely… it’s not a tagline that I probably would have chosen by any means. But I think that there’s so many people who are so passionate about this book that there’s nothing that will ever satisfy everyone. So I think it was just up to the discretion of the marketing mavens.”

The 22-year-old actress added somewhat tentatively, “For me, it was… yeah, not something I would have chosen. But it seems like half the people love it and half the people don’t like it.”

Shailene Woodley cuts off her hair for her latest role, and for charity >>

Among those that approve of the twisted tagline is The Fault In Our Stars‘ author, John Green, who told fans previously, “I found it dark and angry in the same way that [the main character] Hazel is (at least at times) dark and angry in her humor.”

“I could see where [Green] was coming from,” Shailene Woodley went on to say. “But it’s still not something that I would have chosen.”

The young star did not offer an alternative tagline for fans to weigh in on.

Who do you agree more with: Shailene Woodley or John Green?