What do you get for the woman who has everything? Kanye West decided to get fiancée Kim Kardashian an expensive one-of-a-kind Hermès bag complete with a nude painting for Christmas. 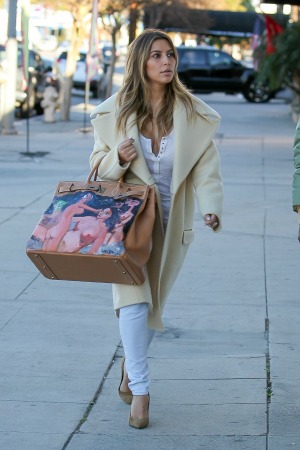 What do you give the woman who seems to have everything? Well, Kanye West thought long and hard about what to get his fiancée Kim Kardashian and the answer was a one-of-a-kind work of art expertly painted on a Hermès Birkin bag.

The present certainly cost a massive chunk of change, but the reality TV star was completely thrilled with her Christmas present and took to Instagram on Thursday to show off her lavish bag — a custom-made tan Hermès handbag with a nude painting on it by famous New York-based contemporary artist George Condo.

Kimye were spotted out around town that same day, looking relaxed and loved up as they completed some post-holiday shopping.

The beauty looked stunning without makeup as she showed off her unique bag that her beau customized with Condo. The bag consists of several nude figures that are based on a series of pictures for West’s fifth studio album My Beautiful Dark Twisted Fantasy.

The couple spent Christmas Eve with the rest of the Kardashian clan at momager Kris Jenner’s house. The family was feeling festive and had some fun with a series of snapshots that Kim also decided to post to her Instagram.

Kardashian may be thrilled with the gift and West’s bank balance may be taking the toll, but fans so far seem to have mixed reviews about the fashion accessory and whether or not they like it.

Tell us: What do you think of Kim Kardashian’s Hermès handbag?