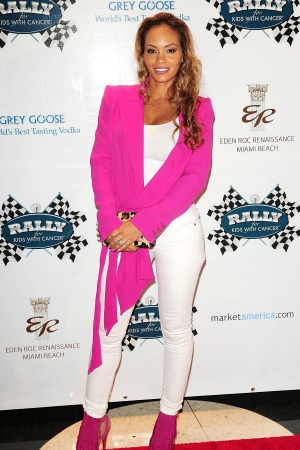 It was a very merry Christmas for Evelyn Lozada. She found a big rock under her tree this year.

The Basketball Wives star, who is expecting a baby in 2014, became engaged to Los Angeles Dodgers player Carl Crawford on Christmas Day. The mom to be posted a photo of her impressive ring on Instagram with the caption, “YES!”

She also shared her thoughts with People about the engagement.

Lozada said, “I’m overjoyed and in complete and utter shock! What a different year and a half it has been — I’m truly happy!”

The reality TV star had a tumultuous and short-lived marriage to Chad “Ochocinco” Johnson in 2012 that ended in domestic violence. She’s now moved on to happier times with her growing family with Crawford.

The 14.5-carat diamond was made exclusively for Lozada by jeweler to the stars Jason Arasheben at Jason of Beverly Hills. The jeweler recently designed Gabrielle Union’s engagement ring, too.

Her rep told People that the reality star “wasn’t expecting a proposal at all and that “it took Evelyn by surprise.”

Lozada already has a daughter — 20-year-old Shaniece — from a prior relationship, but she’s ready to hit the diapers routine all over again.

She told the entertainment magazine in late November, “I’m excited about being a mommy all over again. This is something I’ve been wanting for years and I can’t believe it’s finally happening.”

What a great way to end 2013! Congratulations, Evelyn and Carl!