An ugly rumor reared its ugly head over the Christmas holiday as stories surfaced that Dean McDermott cheated on his wife Tori Spelling. 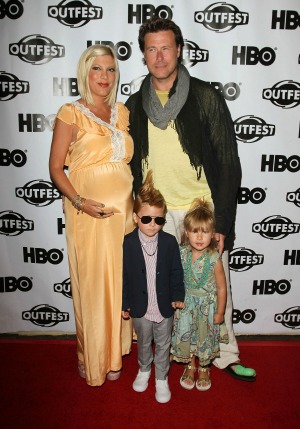 It must have been an awkward holiday in one celebrity household. Several media outlets are reporting that Dean McDermott cheated on his wife of seven years, Tori Spelling.

The news is this week’s cover story for Us Weekly and the publication even names the woman who was reportedly involved. The 47-year-old McDermott has a new job as the host of Chopped Canada. He spent the early part of December promoting the gig in Toronto, Ontario, and that’s when the indiscretion allegedly went down.

According to the magazine, the reality star met 28-year-old Emily Goodhand through friends. He invited her up to his room at the Fairmont Royal York Hotel and she accepted his invite. They reportedly engaged in sex after the dad of five talked about his marriage to the former 90210 star.

Goodhand told Us Weekly, “He told me he and Tori had a sexless marriage. I believed him.”

Goodhand spent two nights at the hotel with Spelling’s husband in Toronto while his wife was home with their four kids — Liam, 6, Stella, 5, Hattie, 2, and Finn, 16 months. The couple has had a rough two years after her challenging pregnancy with Finn that required emergency surgery after her C-section and financial troubles when their spending habits exceeded their income.

This is the second marriage for both. Spelling was married to Charlie Shanian for two years while McDermott was married to Mary Jo Eustace for 13 years. Their affair broke up their first unions and they married each other almost immediately after their divorces were final. McDermott also has a son, Jack, 15, from his marriage to Eustace.

The couple has yet to make an official statement, but Goodhand is talking, which makes the situation even more difficult to keep things private for the family.

She shared what McDermott said about his wife, “He said, ‘I love my wife. I love her so much, but she just won’t sleep with me.’ I didn’t ask why because it was awkward.”

The alleged mistress also admitted that they “absolutely” used protection during their sexual encounter, but it sounds like she is having second thoughts about the affair.

She apologized to Spelling in the interview, “I made a stupid decision… I’m an adult and I make my own decisions. I’m sorry. I f***ed up.”

It looks like McDermott has a lot of explaining to do this week.