Ariana Grande and Nathan Sykes have broken up after just a mere five months of dating. 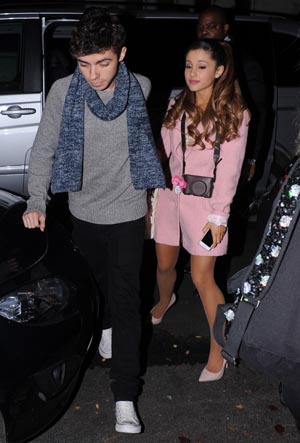 After happily dating and gushing about each other for a few months, Ariana Grande and Nathan Sykes have decided to break things off.

The pair, who began dating in August after they released a duet together, split up a few weeks ago, according to a Us Weekly source. “They just weren’t into it anymore.”

Their collaboration was the song “Almost Is Never Enough,” which was recorded for The Mortal Instruments: City of Bones film. Shortly after the release of their song, Grande and Sykes confirmed they were an item through Twitter.

Following a cozy visit to Disneyland together in September, the cute couple could not keep the secrecy of their romance private any longer. “So, I guess it’s obvious now… thanks to everyone who is being so lovely.” The Wanted singer wrote. “I’m so happy #butweareterrified #pleasedontkillme #orariana,”

Then, Grande herself spoke out about her new man to Access Hollywood during an interview that same month.

“He’s the sweetest. He’s amazing,” Grande gushed. “I have to say, he’s one of the most talented vocalists I’ve ever heard in my life.”

Grande also shared her feelings for her now ex-boyfriend in the February 2014 issue of Teen Vogue, saying, “It’s not as tough as people would think. We have the same music manager, so we can see each other’s schedules and plan little trips as often as we can.”

Unfortunately, it seems the duo got tired of each other before they even had much chance to go on all those trips. But according to a close pal of Sykes, the two actually hardly ever saw each other and took a break before deciding to end things permanently.