Are you craving an adventure? Are you done with the monotony of everyday life? Do you want the extra push to get you to make that decision to change it all? This track is likely the catalyst you’ve been waiting for. 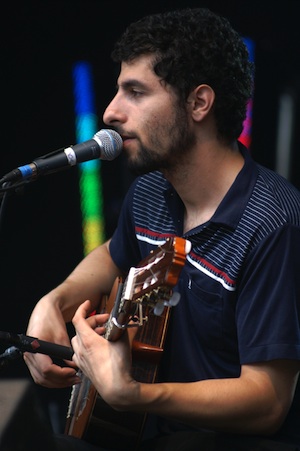 I wasn’t too interested in seeing The Secret Life of Walter Mitty, even though it features the beloved Ben Stiller.

I can see it’s one of those movies that you can’t tell is about your life, or that you can entirely relate to it, until you watch it. Yes, you have to pay that $10 to see it, but I feel enough of you would be inspired by it that you may be inclined to even purchase it on DVD. (You know, in case you are too afraid to apply the lessons you learn from it now.)

This may be Ben Stiller’s last acting role >>

The movie comes out on Christmas Day and revolves around a character who doesn’t seem to take many risks. One day, though, he not only chooses to but ends up on the adventure of his (and probably our) lifetime.

The trailer for the movie features Jose Gonzalez’s “Step Outside,” a beckoning, urging and rousing song that is the perfect mate for this introspective film. Stimulating drums and an angelic chorus adorn the most passionate angles of the song — which I feel are what emulate the escape from the everyday — whereas the slow-paced portions of the song mimic the humdrum nature of complacency and conforming.

It’s a powerful message that’s not to be released unless you are ready to immerse yourself in it. Sure, on the surface it’s a crowd-pleaser, but this song could change your life by challenging you to “step outside.”

The song’s arrangement combined with its soaring vocals make the message leap out of the speakers and into your heart. It’ll resonate within you this season, especially before those New Year’s resolutions are made.

Make it a resolution to stay updated with music! Sign up for our newsletter here >>

The song is spellbinding, and the movie’s entire soundtrack features similarly magical songs. Also a winner is Of Monsters and Men’s “Dirty Paws,” which entices listeners with its suitability for an across-the-globe voyage movie.

What do you say, readers? Are you going to check it out? Let us know if you watch the movie tomorrow, too!