Phil Robertson is not only standing by his anti-gay comments, but has admitted he too is a sinner during a weekend Bible study session. 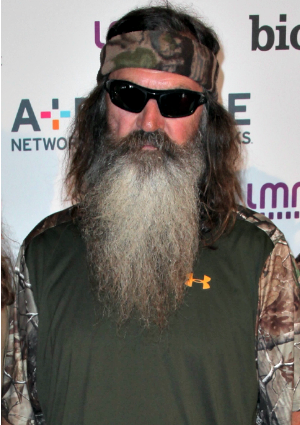 Phil Robertson’s anti-gay comments have made headlines over the last week, but did you know the Duck Dynasty star counts himself as one of the many sinners out there?

Speaking at a small Bible study group over the weekend, the bearded reality television regular explained, “I love all men and women. I am a lover of humanity, not a hater… I have been immoral, drunk, high. I ran with the wicked people for 28 years and I have run with the Jesus people since and the contrast is astounding.”

“Sexual sins are numerous and many. I have a few myself,” he’s quoted as admitting.

Get caught up: Both arguments in the Duck Dynasty debate >>

Offering advice on the “safest course of action” to those listening at White’s Ferry Road Church, Robertson shared, “If you’re a man, find yourself a woman, marry them and keep your sex right there… You can have fun, but one thing is for sure, as long as you are both healthy in the first place, you are not going to catch some debilitating illness. There is safety there.”

Kid kicked out of school over a Duck Dynasty shirt >>

Making it clear he isn’t apologizing in any way to those who were offended by his earlier comments, Robertson added, “I will not give or back off my path. All I did was quote from the scriptures.”

Concluding, Robertson told the room Jesus will take away all of their sins by sharing, “If you’re a homosexual, he’ll take it away. If you’re an adulterer, if you’re a liar, what’s the difference? If you break one sin, you may as well break them all.”

Does Phil Robertson’s admission that he too is a sinner change your view of him in any way?