Like a lot of people, Ed Sheeran can’t hold his liquor. He recently had a drunken spill at a Hollywood A-lister’s home. 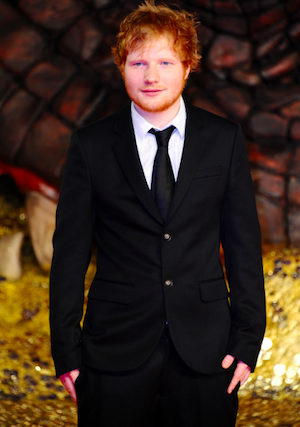 What would Ed Sheeran be doing at Jennifer Aniston‘s house? Apparently, the British singer and actress are pals, so much so that Sheeran passed out at her place. It seems as if someone had a little too much to drink and needed a rest.

According to Yahoo’s OMG UK, Sheeran admitted, “I passed out… she has this crazy house with a big staircase that goes down to the pool. I had drunk a bit too much and needed a time-out, so I went down and laid on one of the beds outside by the pool and passed out there.”

Ed Sheeran is living his childhood dream, except for one thing >>

Aniston’s not the only person Sheeran likes to share drinks with. While at the premiere of The Hobbit: The Desolation of Smaug, he revealed that he recently hung out with some of the cast. “I got taken out by Luke Evans and Benedict Cumberbatch and we drank a lot of espresso martinis… and then I ended up back at the hotel.”

He continued, “I thought Martin Freeman was getting on it as well and I spent the whole time really having a deep drunk conversation with him, telling him that Ricky C. from Ali G. was a seminal role and he should return to that. I don’t know if it went down too well.”

Sheeran seems like a fun person to hang around with. The 22-year-old has a song called “I See Fire,” featured on The Hobbit: The Desolation of Smaug soundtrack.