Two women accused of defrauding Nigella Lawson out of over a million dollars have been cleared of any wrongdoing, and the celebrity chef is furious. 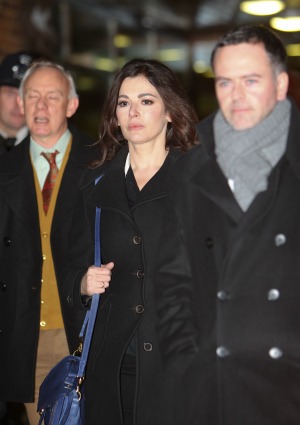 Sisters Elisabetta and Francesca Grillo have been cleared of any wrongdoing in a fraud case that saw serious drug allegations levied against celebrity chef Nigella Lawson.

The Grillos stood accused of defrauding Lawson of over $1 million by using her and ex-husband Charles Saatchi’s business credit cards to purchase luxury personal items like designer clothing and bags and exotic vacations.

The sisters maintained that the spending was authorized as hush money to keep their knowledge of Lawson’s drug use secret — a charge Lawson adamantly denied. While she did admit to the occasional use of cocaine and marijuana, she said it was not habitual or an addiction and in no way went to the extent the sisters claimed.

Nigella’s ex threatened to destroy her >>

Lawson released the following statement after the jury reached their decision:

“I am disappointed but unsurprised by this verdict,” she said. “Over the three-week trial the jury was faced with a ridiculous sideshow of false allegations about drug use which made focus on the actual criminal trial impossible.

“My experience as a witness was deeply disturbing. When false claims about habitual drug use were introduced I did everything possible to ensure the CPS was aware of the sustained background campaign deliberately designed to destroy my reputation. During the trial not one witness claimed to see me take drugs and not one of my three assistants was asked about these claims by the defense, despite being cross-examined at length. I did my civic duty, only to be maliciously vilified without the right to respond. I can only hope that my experience will highlight the need for a reform that will give witnesses some rights to rebut false claims made against them.

“Even more harrowing was seeing my children subjected to extreme allegations in court without any real protection or representation. For this I cannot forgive the court process. When I gave evidence I spoke of my regret at having to talk about the circumstances of the end of my marriage and also voiced concern about a campaign to circulate false allegations carried out over the course of this summer, then circulated as witness statements from the Grillos by a publicist, and eventually added to the defense of this prosecution in November. That concern remains,” she concluded.

A spokesperson for Scotland Yard said they will not be investigating the chef after she admitted to casual drug use.

“Allegations that one of the (alleged) victims was involved in taking Class A drugs have been made during the course of this trial. At this stage the Metropolitan Police will not be investigating these allegations.”