Shooting a love scene with Leonardo DiCaprio isn’t as awesome as it sounds. Margot Robbie, his co-star in The Wolf of Wall Street, dishes about their onscreen romance. 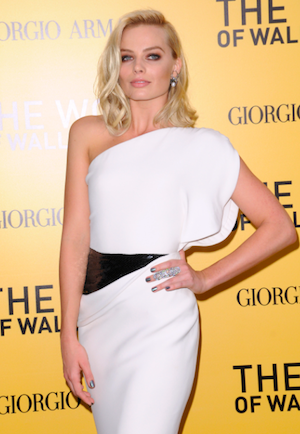 In this month’s The Wolf of Wall Street, Margot Robbie plays Leonardo DiCaprio‘s onscreen wife. During this time, they have their fair share of sex scenes. By nature, the film is all about excess and debauchery. However, what looks like a steamy make-out session could actually be extremely awkward.

Leonardo DiCaprio says no to drugs >>

Robbie tells Page Six those love scenes were “the least romantic thing.” Gasp! That may be hard to believe considering DiCaprio’s been a bona fide heartthrob for almost 20 years. But Robbie assures us it was all about the setting.

Leonardo DiCaprio may finally be ready for marriage >>

In one of their scenes, a barking dog needed to be present. Off camera, they had to persuade the pup to snap at DiCaprio.

“The whole thing ended up being quite comical,” Robbie said. “We [had to] entice this dog to jump in the bed and bite at Leo’s feet… so we had dog trainers at the end of the bed [with] dog treats… we’re putting chicken liver on Leo’s toes. We’re in a small room, it’s hot, it’s sweaty, it smells like dog food.”

That doesn’t sound romantic at all. Some of the situations called for DiCaprio to jump out of his comfort zone, but the actor had no problem doing what needed to be done for the story. He told Extra, “When you do a character like this, you have to go all out. We can’t pull any punches. You have to just swing for the fences, so hopefully people enjoy it.”

The Wolf of Wall Street opens in theaters Dec. 25.